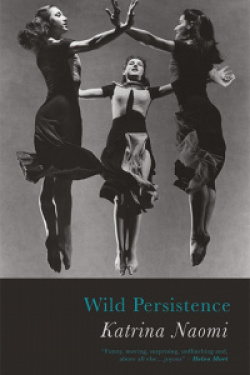 Prize-winning poet, translator and critic Katrina Naomi is the author of two previous full-length collections of poetry and four poetry pamphlets.  She has a PhD in creative writing from Goldsmiths and is a tutor for Arvon, Ty Newydd and the Poetry School. Wild Persistence is her first full-length collection since moving to Cornwall.

The poems in this volume cover a wide range of subject matter: unloved buildings, unpromising suitors (“the good-looking I won’t tolerate, let alone the rest”), camping under the stars, sexual preferences, making love, gun culture and violence, to name but a few. It also covers some of the darker sides of life – in Naomi’s case, the loss of a father through divorce when she was seven, and the illness experienced by her sister and partner. There is also a section of poems that deal with the aftermath of an attempted rape.

The cover photograph, ‘Martha Graham – Celebration (trio)’ 1937 by Barbara Morgan is the perfect fit for Naomi’s poem ‘How to Celebrate a Birthday’. In it, she says “It’s important to feel a little bit special, / even before the cava. And there has to be cava.” She urges us to “celebrate” who we are and –

Dancing shows us who we really are

And look up at the stars on your way

back, look at them for longer than usual.

Find one that might burn for you; name it.

These lines are well-crafted. Attention has been paid to key words that have been positioned for special emphasis (“dancing” and “dance”) at the beginning and end of the line. I also like the way the reader is made to return to the left hand side of the page for the word “back” to give  a visual interpretation of what is happening.

Naomi’s interest in different languages and cultures is reflected in her translations of two poems from the Mexican poet Yohanna Jaramillo, a translation of a poem into Kernewek (Cornish) and poems inspired by a trip to Japan.

Collaborating with other artists - in particular, the visual artist Tim Ridley and the poet Judy Brown - has provided the catalyst for a number of works in this volume. Residencies at places such as the Arnolfini and the Hawthornden International Writer’s Retreat have also sparked ideas for several poems in this book.

‘London – A Reply’ and ‘Dualism – A Manifesto’ reveal Naomi’s inventive wit. According to these poems, Naomi is a poet who is tired of London but not tired of life. She is a poet who “could belt out Shirley Bassey, “,”eat vegan sushi in a revolving restaurant in Tokyo”, and “knock back two / jugloads of gin / Cornish of course” in one go. In another poem, she turns the tables on Billy Collins (who once wrote a poem entitled ‘Taking Off Emily Dickinson’s Clothes’) by taking off his own clothes. The contrast between Collins fumbling with the mother-of-pearl buttons on Emily’s long white dress and Naomi taking off his “lemon cashmere sweater” (at least it’s cashmere!) and “crumpled denim” could not be more marked and is done for its humorous effect.

After reading this collection several times over I keep coming back to ‘At Noongallas’ and ‘Swaling on Boscathow’ – two of my favourite poems. The former is a fine example of a specula (mirror) poem where the second stanza repeats the first, but in reverse order. These are tricky to pull off. The latter is an account of a controlled burn on a moor, “swaling” being a local word in Devon and Cornwall derived from Middle English swelen meaning “to burn”. I like the edginess of this poem which “is all surface and speed” and retains that ability to thrill right up to the final two lines:

We breathe in the distant danger

The darker aspects of this volume - in particular, the poems dealing with human relationships and sexuality - are unsettling and confrontational and one senses the unease with which they were written. Beneath the hard exterior of their lines there is a potent vulnerability. These poems should be commended for their lucidity and honesty in addressing difficult subjects.