Competition closes in 12 days, 23 hours. Get details and Enter. 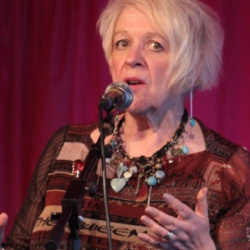 Scotland’s makar, Liz Lochhead, is trying out new poetry for her forthcoming Edinburgh show later this summer. Poems like ‘Song for a Dirty Diva’ might be suitable for the Fringe, but Devizes on a Sunday night? “I can’t believe I’m doing this,” confesses Lochhead, pictured at Edinburgh last year. But she carries on, ending her final poem, which was composed after an encounter in a ladies loo in Edmonton, Alberta, with a reference to “free incontinence supplies”. There’s nothing predictable about Scotland’s poet laureate, and the appreciative audience at Devizes town hall was certainly not fazed in the slightest.

Another poem, ‘Advice to Old Lovers’, includes mentions of Paul Simon and Billie Holiday, along with the lines: “To find an old love ludicrous, that’s what would hurt” and “If you ever loved her, tell her she hasn’t changed.” Lochhead writes songs herself, although she claims they contain “too many words”, and music is the soundtrack to many of her poems. ‘Old Vinyl’ packs an extraordinary number of song titles into one poem: “Nostalgia’s everything it used to be, when you’re half-pissed and playing that old LP.”

She talked of her affection for Glasgow School of Art, where she studied in the 1960s, as well as writing her early poems in the library there, which was destroyed in the recent devastating fire. She read a poem published in the anthology Jubilee Lines, about a working-class, female, art student – “Dolly bird, to quote her favourite mags, is what she aspires to” – in days well before the word “inappropriate” was invented: “In 66, there’s plenty of sex, but no sexism.” She told the audience she started painting again a few years ago, and the cover illustration of her current book is one of her own works, from 1967, Girl Undressing: black bra, red tights, pink shoes.

Her poetry is warm, funny, down-to-earth, and moving. In the foreword to her most recent collection she says: "See, I do write quite a lot of 'occasional' poems - often rude-and-rhyming - poems, entertainments, out-loud performance pieces, dramatic monolgues - and I'm certainly not ashamed of them at all. They are good fun (as well as, sometimes, technically, quite hard work) to write." One of her opening poems, 'The Choosing', is about the different paths taken in life by two schoolfriends: "I think of those prizes that were ours for the taking / and wonder when the choices got made / we don't remember making."

I was in Devizes for a walking weekend, and had intended it as a brief break from poetry. But our first such excursion, five years ago, had included a chance encounter with and a reading by Carol Ann Duffy. So when we discovered her good friend and fellow laureate was in town, who could pass that up? It was serendipity.

◄ A poem about togetherness - then everything changed. Prize-winning poet Jo Haslam talks about lockdown