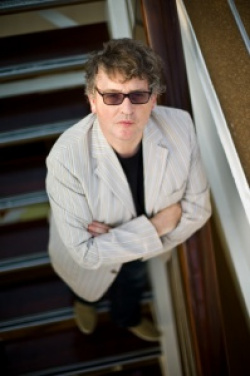 The shadow of the late Seamus Heaney loomed large over this evening of poetry reading – he should have been there. As Don Paterson, sadly but brilliantly standing in for the maestro, told the packed auditorium at the 3rd contemporary British and Irish poetry conference, at Manchester’s Martin Harris Centre for Music and Drama: “A friend sent me a message after Seamus died saying, ‘We’re on our own now’.”

The loss of Heaney to all of poetry but particularly to these two men who he mentored, encouraged and inspired, was palpable. Both read from their own work at this early curtain-raiser for the Manchester literature festival on Saturday, but kept drifting back to some of their favourite Heaney poems, as though they didn’t want him left out. ‘The Spoonbait’, ‘Two Lorries’, ‘The Harvest Bow’ and ‘Sloe Gin’ were among the gems read with deep affection and emotion.

Paterson is a wonderfully self-deprecating yet acerbic writer. He admitted that much of his poetry is gloomy and dark, and by way of proof offered his heart-breaking remembrance of having a pet dog put to sleep in ‘Mercies’. He has confessed in the past to being an unashamed shedder of tears, and it shows in many of his poems. But he also shared thoughts on his birthplace of  Dundee bidding to be City of Culture – it was blunt, cruel and hilarious.

When poet laureate Carol Ann Duffy asked him to contribute to an anthology of poems based on the Queen’s 60 years’ reign, he was allotted 1997 which he ruefully confessed meant he had to write about his moment of hope, voting in a Labour government and bringing to power who he now calls “my real-life villain” - Tony Blair. ‘The Big Listener’ must make uncomfortable reading for Blair, if he ever saw or heard it.

Paterson – who is just emerging from a two–year creative break - admitted that in an idle moment he had succumbed to that modern scourge, looking himself up on Google (what he called ego-surfing). That gave rise to a terrific and very funny poem called ‘What Paterson fails to realise is’, because that’s how most online criticism of him seems to begin.

The lauded and multi-awarded Paul Muldoon, pictured, also seemed wretched after the loss of Heaney,  who he first met in 1969. But it felt as though the evening was cathartic for him.

He can seem aloof, almost arrogant (he was not happy when someone in the audience sat with an iPad in front of his face recording him – SO rude). But he warmed up and that warmth touched the audience of all ages, from about 10 to 75 at a guess.  He worked hard to share the process and gestation of poetry writing. He and Paterson are both teachers (and musicians) and it showed. If only all schoolchildren could study poetry like this.

His slow and measured reading of his own work helped to cut through the famed difficulty of his language, text and vocabulary.  ‘Why Brownlee left’, ‘At least they weren’t speaking French’ and particularly ‘Anseo’ took on new depths read in that lovely voice (no hint of American accent despite two and a half decades there) while ‘Cuba’ and ‘Cuba 2’ were atmospheric and joyful.

As we left, I overheard a woman say: “My memory is so bad I keep a scrapbook so I know what I have seen.”. She won’t forget this evening in a hurry.

The impact of Seamus Heaney's death is still being absorbed, and your review reflects that very well, Judy; the sense of loss felt by two big figures in the poetry world. I'll be watching three programmes on Heaney on BBC4 tonight from 10pm onwards. After the football.