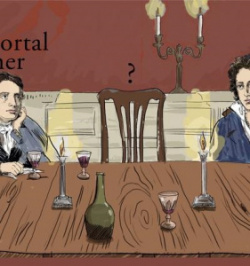 The Keats-Shelley House Museum and Library in Rome is launching new digital collections celebrating the lives and works of John Keats and Percy Bysshe Shelley. The launch coincides with the start of Keats-Shelley 200, three years of events, exhibitions and activities in the UK and Italy.

The digital collections site brings together for the first time the museum's collection of some 400 autograph manuscripts, as well as art works and relics related to the two great Romantic poets.

The manuscript collection includes an autograph letter written by John Keats to his friend Thomas Monkhouse on 21 June 1818, the day before Keats set off on his walking tour of Scotland, a trip that would inspire him to write a dozen or so poems and included an attempt to visit his hero Wordsworth in the Lake District. The letter reveals Keats’ love of Wordsworth, which followed Benjamin Haydon's Immortal Dinner in London in 1817 when Keats and Wordsworth first met. There is also a reference in the letter to Keats's poem Endymion, which was published in 1818.

Other manuscript letters in the collection include one dated 6 June 1818 written by Keats to his friend the artist Joseph Severn. The poet and the painter were still living in London at that time and were part of the same circle of friends. Two and a half years later Severn nursed Keats through his final months in Rome. There is another letter from Severn to Keats’s friend Charles Brown dated 27 February 1821, a few days after Keats’s death in Rome, and recording the poet’s last spoken words in the room which is now part of the museum.

The museum and library is also launching the Immortal Dinner competition, inviting visitors to the Keats-Shelley House both real and virtual to nominate the person whom they think John Keats would most have enjoyed meeting. The additional dinner guest can be someone who is alive today or dead, real or fictional. In December 2020 all the votes will be counted and the names of the three most popular choices will be announced.

On 28 December 1817 a literary gathering took place at the London home of artist Benjamin Robert Haydon. Among the guests attending this event, now known as the Immortal Dinner, were Keats and Wordsworth, and essayists Charles Lamb and William Hazlitt. Later letters and diaries describe the evening as one of excitement and tension, conviviality and laughter. Votes can be placed in a ballot box at the Keats-Shelley House or online at info@keats-shelley-house.org

The Keats-Shelley House in Rome officially opened as a museum in 1909 and, more than a century later, normally attracts some 25,000 visitors a year from all over the world and welcomes around four hundred visiting school groups annually. It is located at 26 Piazza di Spagna, at the bottom of the Spanish Steps, and was where John Keats died in 1821 from tuberculosis, aged 25.