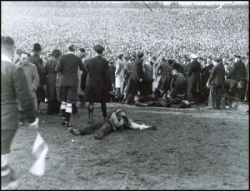 They were only going to the match

Bolton versus the folk from Stoke

Over eighty thousand of them

Burnden Park, home of the Wanderers

Excitement in the air

The war was over

Gates shut as the ground filled to burst

Some climbed in over the railway embankment walls

But there wasn’t enough room for so many

A sickening roar, not that of a goal

Screaming, crying, and the sound of dying

Muffled under the weight of the helpless

Losing sight of the sky

Then an eerie silence

As the light goes out

Thirty three never made it home

A town in mourning

Unbelievably they had to play the game

Matthews sickened by the events

Playing out a pointless goalless draw

It would never happen these days

The media wasn’t as it is now

The country had suffered enough death

Still recovering from another great war

Football was meant to be an escape from that

I note the reactions to my comments.
The content of this blog describes a tragedy that history
appears to have passed-by. One of the reasons may be
that it occurred in a very different era to that known
to those living in a modern "global" world when almost
any event is given news time . I used the term "perhaps inured to suffering" - and stand by this
observation. My family have a military history, losing
kinfolk in the course of their lives, and know of such
things and what was needed to carry on. There
were so many dreadful events known to so many that
there was a determination of "get on and get over it"
- especially in the personal sense at a time when grief
was just that - a personal thing to be dealt as such.
It is not callous or unfeeling to bring attention to the
past...as L.P. Hartley wrote so perceptively in his
famous novel "The Go-Between": "The past is a foreign
country, they do things differently there." And that
certainly includes attitudes to tragedy from whatever
hideous/tragic source or set of circumstances.
As for this entry as a "poem"...I see it more as a
written account, or as I put it earlier: "a timely reminder".
Those who take offence are entitled to their views and
I am content to refrain from responding in kind, except
to say I've seen violent death at first hand and saved
lives that might have been lost. A certain mindset
is required that is known to those who have been there and done it. If it discomforts some, then so be it.

Jeff, well done with this poem. Burnden Park has been to some extent the forgotten football disaster. There were huge crowds at games just after the war ended. Chelsea had 100,000, way over capacity, for a friendly against Moscow Dynamo in 1945, and were lucky to escape a similar tragedy. And yes, you're quite right to be disappointed with one of the comments on here.

Excellent poem but not sure that Burnden Park in 1946 was "the first major disaster in football in Britain". Check out what happened at Ibrox on 5 April 1902.

Of course this is not to diminish the significance of the Burnden disaster.

Thanx Tracy & Laura for your comments over my tribute, very much appreciated. I think about half the comments of Facebook and people who I have spoken to etc didnt know about it.

MC Newberry - just read your comment - I agree with Laura, your comments are very disappointing - you dont even comment on the poetry as WOL is intended. It is not meant to have a go, it is a tribute to those who died and to raise the awareness when other disasters are readily remembered.

I recognise the reasons for this entirely and in no way is this meant to detract from the bravery of those in the war. If there is any hope of any compassion in this world, what is wrong anyway with poeple recognising other peoples grief, why shouldn't Burnden be remembered. It wasn't written as a timely reminder! JD

Got goosebumps reading this Jeff - didn't know about this.

How bloody awful for them, making them play the game after that?!

Jesus christ MCN - 'got on with their loss'?! Oh aye, I reckon they all just walked away and never once thought of it again eh? And 'so-called policing failures'? I REALLY hope you're not referring to Hillsborough there. You're unbelievable sometimes.

A great poem Jeff in many ways - thanks for writing and sharing.

A timely reminder of how folk - perhaps inured to suffering following the awful years of WW2 -got on with their lives and mourned in more personal style...unlike today when every personal loss is seen somehow to be that of the nation as a whole and the media promote each tragic circumstance via a 24 hour news service hungry - often distastefully so - for content.
NB - I doubt if there was any mention of so-called policing "failures" back then.

The Burnden disaster 1946, 67 years ago today. In the shadow of other football related disasters, few people know about this.

It was the first major disaster in football in Britain, yet it is seldom remembered or commemorated, maybe it's time to change that.

RIP the 33 supporters from Bolton & North west who died.