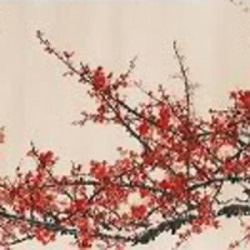 Mr Nagata looks into the embers of his dying fire

And pulling the sack around his shoulders

Takes another sip of Ballantynes.

There is the girl who he tries to forget

Mr Nagata thinks of his daughter

And prays for her safety

For his wife he has no concern.

There is a music stand and a dextrous arm

Sawing the bow of an invisible cello

He hums to himself.

Only the sound of the cracking wood

Tomorrow they will return

And he will slouch off to the hills

Until they have gone.

He has eaten a tin of Pacific Salmon

He has consumed three cans of coca cola

He is on his fourth whisky.

By now the plum should be in blossom

Heaving himself into the wooden shed

Leaning at a crazy angle

Mr Nagata thanks his gods.

He takes the washing line from round his waist

Beautifully written Dave. Clever use of imagery and an end that takes you by surprise. Nice one!

So sparse & simple. It seems very Japanese with a hint of Zen Buddhism in there. The stanzas echo haiku. This could all be filtered through western eyes of course but I'm convinced!
Some of the detail is almost random but I like this - it paints a picture & helps to tell the tale. Very enjoyable.

Hi Dave - interesting to read about how you write, and that feeling that the ideas or the language at least, might evaporate before you can get it down. I often get ideas while out walking, sometimes a whole poem seems to appear. Then . . . disappear!

Never too sure where to log these responses but thank you all.

To Ann : yes it could have been much longer, a short story really, but I went for a minimalist approach, otherwise it would never have been finished, I work in short bursts, infrequently.

To Melanie : getting a non-cerebral response is a great compliment, thank you.

To Antonioni : naturally I didn't know it would end like that until I started typing. It was just a series of impressions or scenes. They could have gone in virtually any order, other than the first and last.

To Marianne : Yes I went to see NW and enjoyed (?) it immensely, because it dared take it's time. I think the Japanese are among those people who see life and death somewhat differently.Ballantines, features in one scene. My father's favourite whisky.

To Julian :I'm glad it's pictorial, as they say a picture tells.....etc

To Ray : It sure could be tidied up. I think I could have left it overnight to cook. See what it read like in the morning,

I've had this poem brewing since March 11. I didn't know when it would appear or how. Last night I lit my first fire of the year and sat out enjoying every minute. Yes I had revisited Murakami's "after the quake" so some stolen images. The first line came to me as I watched the embers, and then a number of ideas followed. I knew if I didn't get them down soon they would evaporate. Can't write using pen and paper any more, the process gets in the way and can never read my own writing. Took a bundle of ideas to the laptop when the fire burnt out and knocked this out. Dangerous calling somebody by a made up name. Could mean Mr Shitface in Japanese for all I know.

This is very impressive poem IMO. So much held back, made me think of Ishiguru's stories.

Interesting controlled delivery, which is very Japanese, keeping everything in check, but hints of something not being quite right planted in there in most if not every stanza.

I went to see Norwegian Wood the other week, I was worried because the book is still travelling around in my veins from first reading it years ago, haunting me still - its characters and plot lines are as fragile as petals. The film didnt disappoint, have you seen it I wonder? The 'walking' scenes were incredibly powerful, the scenery just as it should be - hazed, dream like, all a bit of a blur...how could this have been left to happen - sort of feeling, walking around with the clouds pulled over your eyes...blimey I am waffling, I have this poem to thank for that. I enjoyed this.

What a lovely poem. Probably not the desired response but at the end I started laughing. Takes all sorts.I loved the story, though. Rhythm could be tidied up a few places.
Like, simply "Mr Nagata surveys the familiar / pulling the sack around his shoulders" Could have done without the Zen proverb verse, though the following one I enjoyed a lot.