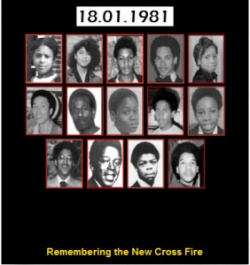 On the 18th of January 1981, 13 young people died in a fire in New Cross, South East London (a fourteenth committed suicide after losing so many friends). Just shy of thirty years on, these are the contemporary reflections of a man who was a seven year old boy at the time. Widely thought to have been a racially motivated attack, more recent advances in forensic technology have suggested otherwise, but the impact at the time and the nature of the police, political and media reaction, regardless of the cause, were to create a deep and to my mind a still unhealed rift between the community and the powers that be.

The skyline's changed, but you know I wonder

How much has changed for those living under

Which once were swelled by a black plume as charred as hate,

And darkened further still by a police response inappropriate and late?

It was supposed to be a night of great celebration,

Not one to create a date of shame for a city and a nation.

14 passed over, many felt as the result of one bigot’s action,

30 years have passed since seems we will get no satisfaction

Or justice for the potential that was stolen by fire on a cold winters night,

Let’s hope any perpetrator is not hidden from Karma's ire and all seeing light.

You may ask "What was the reaction from the voices the establishment?"

Well, with indifferent apathy ‘our government’

Let it pass without acknowledgement.

Despite the size of this tragedy

We saw no messages of goodwill or sympathy

Let alone a visit from a significant dignitary.

But, the real people, although with Babylon's old bill

Many here were still so obviously angry

Despite the headlines to the contrary,

Twenty thousand plus of us went up and demonstrated peacefully.

Those fourteen who died, galvanised a community - together,

Although scars even now, are carried inside, memories of this and you too, will also last forever.

Sure the skyline has changed but you know I do wonder,

Just how much has changed for those living under

Which were once swelled by a black plume as charred as hate,

And darkened further still by a police response, as inappropriate as it was late?

In 2006 a new student bursary scheme was created, in memory of the New Cross Fire Victims. The scheme awards annual grants to two current or former students of schools and colleges in Lewisham, wishing to study at Goldsmiths University of London. The scheme, which was initiated the Mayor of Lewisham, has the backing of all the families who lost loved ones in the New Cross Fire. It is a positive lasting legacy which will continue to help future Lewisham students.

A series of events will be held to commemorate the 30th anniversary of this tragic event, including a Cultural evening at the Albany in Deptford, on Friday the 14th of January 2011 and a Blue Plaque will be unveiled on the site of the fire on Tuesday 18th January where I have been asked to perform this piece.

◄ She fed my soul

so, so sad, although i live in manchester i remember this tragic event, i wish you well and give you my support forever it is worth for bringing this back, it's far to easy to forget my friend.
bernie