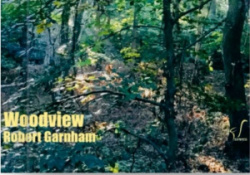 Robert Garnham is a spoken word artist who performs his comedy poetry at fringes and festivals around the UK. He writes for the Herald Express newspaper, edits the online magazine Spilling Cocoa Over Martin Amis, and is a self-styled Professor of Whimsy. He has published five poetry collections, and his short stories are widely published in online and printed magazines.

The poems of his previous collection, Yay! The Search for Happiness, which he performed in a solo show, have a sad undertone, but are also extremely entertaining and funny. The search for happiness seems simple and unattainable at the same time, but the important thing is to face life and enjoy it despite everything. The final poem, ‘Be Yourself’, is connected to the conclusion we find in Woodview, though in his latest collection the themes are developed in less straightforward and more complex ways. The ending is uncertain, and boredom and sadness seem to prevail even in the happiest moments.

He falls in love with neon signs rather than with the moon, which often happens to poets:

which burned his retinas,

turned his brain to mush.

Woodview is a revealing collection featuring autobiographical traits and distant as well as recent memories. In the poems the forest is ever present, sometimes to the fore, at other times in the background; its mysteries, darkness and sunny spells overshadow memories and entice encounters. The protagonist voices his fears and desires along the winding road towards adulthood, aiming to become a ‘person’ eventually. This search for identity implies moments of sorrow and solitude but also love and fulfilment. Wit and irony are interspersed in these confessional poems in a constant conversation with the reader that stretches out in long lines and substantial verses.

The apparently ordinary view of life clashes with reveries and the yearning of the imagination. The city is seen from afar, from “the rear bedroom window”: you cannot experience it directly but can only imagine its captivating reality by looking at the “neon and skyscraper outlines”; it is a vague image that is appealing and blurred at the same time, like a mirage in the desert. The cottage where the protagonist grew up is surrounded by the “dark forest” which is “free of wolves and ogres”. Nevertheless, a darkness of sorts, or rather a “greyness”, seems to creep inside the inhabitants of this little community and into the everyday, where there is no space for ambition. However, creativity surfaces in the way the grandfather keeps his garden, where he built his “tin shack workshop/away from the house”. He operates at “his work bench/the paraphernalia of invention […] the careful choreography of mechanised hardware.” For him it is an escape but also a way to express his creativity.

The neon light is from advertising signs that make promises or claims. Artists such as Tracey Emin and Glenn Ligon have used neon in their artworks to emphasise the artificiality of how it is used commercially, and to reverse how it is used by creating statements in neon lights about love and social equality. In Garnham’s poetry, the mesmerising neon signs are a metaphor for his unstable feelings; they hypnotise him without providing any solutions.

During the narrative, the protagonist changes from being a shy child to acquiring self-awareness and self-confidence; it is a work in progress that involves a search for meaning “where there is none” and for authenticity that might validate him and validate others’ views, other ways of seeing, as in the poem ‘Hamlet’, which was commissioned by Exeter LGBT Pride 2021. During this journey he has become “much more outgoing”, aware of his weaknesses but reaching out for others and being himself eventually:

I’m often surprised by how I changed,

in the company of those who filled me with awe,

no longer tongue tied or prone to blurting,

or wary of the camera, wary of people,

no longer nervous in the glare of a crowd,

no longer the timid soul who thought

it would never happen, or that the world

One love poem in the collection is particularly moving and engaging in its use of repetitions, and they give the poem the rhythm of a lullaby that the poet is reciting to his lover:

Tender so strong my miracle, do you lift me?

Tender so strong in the heat of the night.

Each moment a song when you’re tender so strong.

The poet creates a dreamlike atmosphere that seems to resolve all contradictions and past fallings out. The past and the future are “unblemished” and the present “fragile and vacant” (‘Gone’) in a void that is sometimes incomprehensible but can have its funny sides and unexpected turns, or even “never existed”. This is a remarkable collection that traces Garnham’s progress towards a more mature and reflective attitude to life, expressed in conversational poetry. His journey is our journey towards the discovery of a self that is never completely accomplished; it is a work in progress that projects us towards new possible horizons, envisaged goals and fading perspectives.

◄ 'Bringing drought when instead we should have deluge'