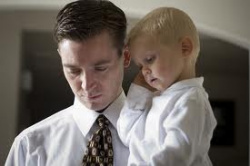 I have a personal recollection which mirrors this.

I can’t recall the first time my dad hit me, nor any subsequent occasion.  But I will add that he was a good man and there is little doubt in my mind that I will have deserved it.

The last time he hit me, however, I shall never forget.

I’d have been about fifteen, I guess.  He’d hit me hard across the face.  It was undeserved and my dad knew it.

He begged my forgiveness instantly and cried like a baby.

It was as though in that moment “the man” passed between us.

IT'S FOR THE GUN WE SPEAK ►

My mum once brayed my sister for no reason.
On realising her mistake she simply said "oh well, your in credit now. Next time you do owt wrong you can get away with it"
The first time that I hit my dad back was the last, and we never spoke again. (Not to each other I mean. We weren't struck dumb or owt)

I will John. Learning from all my mistakes

Stick at it, Kevin. You only get one dad.

After 36 years still working on my relationship with my Dad. He turns 74 this year. Forgiveness is hard when God and Jesus used to smack the judgement and condemnation into you. But we're doing better. Thank you for this poem

That sounds right to me,MC. The question exists because both “the nub” and “two occasions” are the subject of the sentence ie neither is the object. We can see they are both subjects by inverting them ie “the two occasions were the nub...” From schooldays I seem to recall transitive and intransitive verbs come into play when parsing.

The nub indeed! I think it's correct as written. Conversely, had you written "Two occasions were the nub of it" - that would have been OK. It's about what qualifies what.

I’m sure he must have been in a rotten mood and at the end of his tether about something or other, MC. Something made him snap. And just as he forgave me in that instant I too have forgiven him for his once-in-a-lifetime mistake.
Incidentally, for the grammarians amongst you, should it be “the nub WAS ...” or “WERE the two occasions”, since “nub” is singular but “occasions” is plural?

It seems likely to me that your father was moved to do what he
did because whatever you did or said affected him deeply. In
short, perhaps he cared TOO much about you at that moment.
I would say that is something to keep in your heart as a "positive"
in your father/son relationship.

Thankyou, Stephen.
And thanks for the Likes, K, Holden and Frederick.

John, the poignancy of this touched me, and not because I can tell of a similar situation.