From Coventry and Dresden: bilingual book of peace poet’s poems 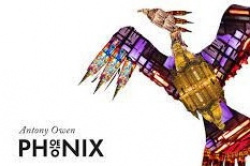 A collaborative book in English and German of poems by Coventry peace poet Antony Owen that reinforces the links between his city and the German city of Dresden has been launched during Coventry’s City of Culture year. Phoenix was the brainchild of translator Dr Rainer Barczaitis at the German-British Society of Dresden, who discovered Owen’s poetry of peace and war a few years ago, and recruited a team of translators to help bring his project to fruition.

In the book Dr Barczaitis says: “Coventry has been on my ‘inner map’ ever since I first visited its cathedral in 1971. I was fascinated by the modern church building as well as by its interplay with the ruins of the cathedral and its message ‘Father forgive’, which so clearly and succinctly expressed a striving for peace and reconciliation.”

Talking of Antony Owen’s poetry, he adds: “The poems I found myself confronted with offered a disturbingly relentless view of people suffering in wartime and from the consequences of war; at the same time there was a great deal of compassion and empathy; and finally I felt anger, which focused on the question of why people inflict such suffering on one another.”

German bombing in November 1940 caused serious damage to Coventry’s city centre, destroying its historic cathedral, and resulted in more than 500 deaths. In February 1945 the Allied bombing of Dresden resulted in a firestorm in which up to 25,000 people died. Coventry and Dresden have been twinned for more than 60 years.

The cover of the book features the stained glass of Coventry’s ruined and new cathedral, and Dresden’s landmark Frauenkirche, which was destroyed in the firestorm, and rebuilt earlier this century. It was produced by Coventry community worker, writer and artist Andrea Mbarushimana. 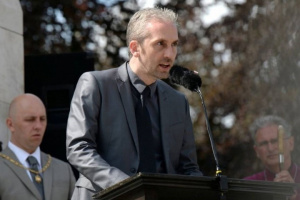 Antony Owen, pictured, said: “The stained glass in the wings are of Coventry's new cathedral (phoenix risen) and also fragments of the stained glass from the old cathedral ruins. The body of the bird is that of the Frauenkirche. The image enmeshes the ruin and the risen.”

He added: “The translators were given complete freedom by me to provide not only the literal translation but also a cultural and personal one that would show how they personally viewed the poem and change any of the local dialects to their own so the German audience could comprehend it as well. Rainer Barczaitis, who edited the book, was pivotal in finding a publisher and this is as much his book and of the other translators and artists who helped create a historic and unique collection of modern poetry.”

The poems in the book are gathered from two of Antony Owen’s collections, The Nagasaki Elder and The Unknown Civilian, and some new ones are included as well. One poem, ‘Coventrieren’ takes its title from a word introduced into the German language after the Coventry blitz, meaning ‘to completely destroy a city from the air’. In another poem, ‘Coventry Homes of Tudor Wood’, Owen says:

Tudor houses will not survive firestorms –

imagine the smell if you add flames and collateral damage.

There is a poem about Dresden titled ‘Inferno’, and other poems about the siege of Stalingrad, the atomic bombing of Hiroshima and Nagasaki, about extermination camps and massacres, the violent interrogation of a woman resistance fighter, the last moments of Wilfred Owen, the Falklands war, black British soldiers, and Flight 93 on the day of 9/11.

Editor Rainer Barczaitis adds in the book: “I do not understand culture of remembrance as something backward-looking viewing only the past; rather, it is a view of the present, of asking ourselves to what extent it is shaped by the past as we remember it, and what impact memory and remembrance can have on the future.”

He offers some details of the nuances of translation: “The Coventry German Circle, who furnished the main collaborators on the Coventry side, contributed a particularly noteworthy part in these discussions by pointing out references to British culture that we might otherwise have missed … [for example], in ‘43rd birthday’, where one reads: ‘Each time I see our Mother blow you out in Rothmans’, to which Coventry explained that ‘Rothmans’ was considered a fairly upper-class brand, whereupon we changed our first attempt, ‘Kippe’ [fag] to ‘Filterzigarette’ [filter cigarette.”

He also points out that the publication “is also intended to send a clear signal of continuing civic solidarity in the very year in which Great Britain left the EU”.

Others have added their words to the book. The Dean of Coventry, the Very Revd John Witcombe, said: “I first encountered Antony pacing around the circular Chapel of Unity in Coventry Cathedral, reciting one of his poems as part of the city’s annual Hiroshima Day commemoration. His passion for looking into the pain of human suffering and loss, and exposing the shared responsibility for that, chimes well with our reconciliation priorities here in the cathedral.

“For a Coventrian to visit Dresden, and in particular the memorial site Busmann-Kapelle just outside the city centre, is a profound and uncomfortable experience. We are somewhat accustomed to German visitors to Coventry paying their respects in the ruins of our cathedral. Dresden pushes us to acknowledge our own destructive tendencies.”

Reverend Angelika Behnke, Frauenkirche Pastor, said: “It’s not only about perception, rather it’s about an attitude.  Am I really prepared to see other people as fellow humans, to look them in the eye? To explore their faces and discover what they yearn for, what they need, what connects us – as human beings – in our thoughts and feelings?

“What this requires is the courage to approach and get close. Antony Owen’s poems bear witness to this courage; they create an immediacy that readers and listeners cannot escape.”

Background: Interview - from Coventry, to Hiroshima, and on to Dresden

'No matter how wide the final margin, a lone ballot never counted so much' ►

A wonderful initiative. Peace and understanding can be fostered in many ways, including through poetry. Reconcilitation is hard and inevitably imperfect work but it has to be pursued. The alternative is the pig-headed revenge culture of Trump and friends.

"War is all hell" - General William T. Sherman Union Army USA
Spite - or retribution? Discuss.
Those who unleash the wind reap the whirlwind.

Such links should be encouraged, advised and funded; Liverpool being the most Bombed city outside of London (East End mostly).
Even my Dad shuck his head at the bombing of Dresden (an act of spite by the English? )