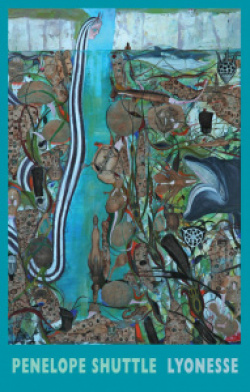 I was drawn to this poetry collection by its title, and by its location. In her preface, Cornwall-based poet Penelope Shuttle mentions that Thomas Hardy always referred to Cornwall as ‘Lyonesse’. The name has a legendary significance, as a supposedly lost land between Land’s End and the Isles of Scilly, inundated by the waves. Shuttle asserts that there is evidence of Bronze Age habitation – and there certainly is beneath the shallow waters of Scilly itself – and thus says that Lyonesse is “real, had historical existence. It is also an imaginary region for exploring depths. It holds grief for many kinds of loss.”

The book has two parts: it is in essence two collections in one. The first is about Lyonesse, and the second is about Shuttle’s personal grief and loss following the death of her husband, the poet Peter Redgrove. She says that at “key moments in this process I came up for air … I began writing non-Lyonesse poems, to re-tune my senses. The poems in New Lamps for Old – the second part of this book – are an account of finding ways to begin again, to find meaning in life after bereavement.”

In many of her poems in this collection, Shuttle’s lines are short, like gasps, almost as if she is bobbing up and down between the waves. ‘Make a Wish’ is a poem about the idea of Lyonesse being anything you want it to be: “days of dogfish and dolphin / the swordfish patrolling / aisle and pew / … as Lyonesse goes down in the sigh of the last ship.”

One of a number of her luxurious, enticing images that seem to beckon you down into the depths is that of the Pre-Raphaelite figure Lizzie Siddal, and her inevitable connection with the drowned Ophelia: “Way down / at the bottom of the sea / Lizzie Siddal is plaiting her claret-red hair.”

Even Brexit is there. “Lyonesse had been on her deathbed for a very long time before the Inundation Event drove her out of Europe,” as ‘An Account of the Submergence’ has it. At the same time it sounds more like a climate inundation, a more important warning: “What can we learn from all this? … That Lyonesse went down with all hands … politicians and scholars maintaining to the last moment that the situation ‘is something we can deal with’? Let us assume the terrible rising of the waters taught believers and unbelievers to know fear at last … Our conclusion is that the seas will go on rising. That cities not yet destroyed will turn blind eye and deaf ear to Lyonesse the wiser.”

At times it seems that Shuttle’s imagination about this lost land is endless, in poem after poem:

The sailors off Land’s End draw up nets

from a place they call The Town

The land took the sea on trust   Big mistake

The land gambled with the ocean  Lyonesse rued the day

And in a poem called ‘My Old Lover’ she anticipates the subject matter of the second half of the collection:

weeping for a year

hoping for a last glimpse

in some sea-hued basement bar

before he and Lyonesse

In the ‘New Lamps for Old’ section of the book, she is always aware of traces of ‘husband’ … “a thousand footsteps in the empty house … the greenways and cliffs … the open book”.

Poem titles like ‘some strange hour of night’, ‘longing is part of it’, and ‘break of day/ this one evening’ tell their own tale, while a freight train towing away “fifteen empty sandpit-yellow wagons” is a startlingly melancholy image at the end of ‘sevenfold’.

‘Hell’ is a hospital of unhappy memories, remembered also in another poem, ‘May time’: “the drive to the hospital, / fury, sadness, fear, / grimness, reaping.”

There are poems about solitude, such as ‘my house’: “quiet listening hard / to nothing and no one.” And the aching sadness of the final lines of ‘glance’:

as you fade away

only you and I can see

These are measured poems about grief and loss – “imagine living without sorrow / I’d forgotten life used to be like that” – that complement the fabulous poems about lost Lyonesse. Penelope Shuttle gives us a collection packed with Cornish myth and magic, overlaid with environmental warning, and a deeper sense of yearning for what has gone.

From Coventry and Dresden: bilingual book of peace poet’s poems ►