From Coventry, to Hiroshima, and on to Dresden: Write Out Loud interviews Antony R Owen 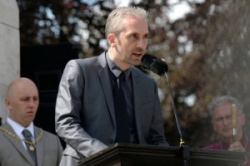 Antony Owen is a poet of war and peace, who posted poems on that subject on Write Out Loud more than a decade ago. He has gone on to publish several collections – including one, The Nagasaki Elder, that was shortlisted for the Ted Hughes award – and win a number of prizes. CND Peace Education (UK) selected him as one of their first national patrons, and his poems feature in a national CND peace education resource to schools. In a wide-ranging interview with Write Out Loud he talks to Greg Freeman about the wartime bombing of his home city of Coventry, his heartbreaking and healing visit to Hiroshima, and how he plans to launch his next book in Dresden.

I first encountered you as a fellow poet blogging on Write Out Loud. Did you feel then - or indeed now - that WOL was a useful place for a poet who was starting out?

Yes. When I first started to emerge into public as a writer Write Out Loud was a safe place with a spirit of openness and sharing. What I have always respected about WOL is the inclusiveness of both sharing work and finding a place to share that work through the gig guide. Some lovely people are on Write Out Loud and Winston Plowes was the first writer to contact me asking me to record one of my poems, ‘The Blooding of Charlie Pike’, which he did so lovingly. I would advise any writer starting out to join the WOL community. I still use it as a resource and read some of the reviews on there.

You already came across on Write Out Loud as a poet of war and peace. Was that your poetic motivation and inspiration from the beginning? 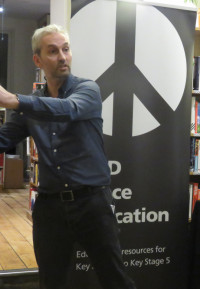 Many inspirations. One was my Nan who was twice bombed out of her home in world war two in the many attacks on Coventry. A strong woman who saw two of her then three children evacuated - and let’s ponder one moment on the word “Evacuee”, because it is no different to the forcible displacement of people seeking asylum from places like Syria, Afghanistan etc from no fault of their own. The average median age in Afghanistan is now 19 with two-thirds of the populace suffering from mental health problems from sustained conflicts. Intervention is a word the US and Britain use with an almost humanitarian tone to justify war but countless governments are slow to intervene when it comes to the consequences of war upon affected civilians or soldiers caught up in the squabbles of avarice and resources.

It breaks my heart and I’ll always write about these people, whether that is a soldier’s family who lost their son in 2009 who was a Para, or a Hibakusha [Japanese atomic bomb victim] from Hiroshima or Nagasaki whose skin hung from their cuticles like thin spun silk in the hell that an atomic bomb creates. Many of these atom bomb survivors I have met or researched experience trolls who insinuate they deserved it because “they” were cruel to POWs, which is ridiculous. Imagine my Nan being blamed for being bombed because of the British empire invading two thirds of the world and creating concentration camps where thousands of children died (Boer war). It is a grotesque and stealth psychological war crime to label any people for the actions of leaders or overlords who inflict their ideals on nations that wish to be left alone.

My other inspirations are my great-grandfather Robert Owen who survived the Somme (hence the R in my name Antony R Owen, named after him).  Another inspiration was growing up in the violence of the 80s as a kid, seeing the madness of 54,000 nuclear weapons existing in the world which equated for about five nukes for each city in the world with most of those nuclear weapons having a minimum of 70 times the power of the Hiroshima bomb. Imagine that. Also imagine if you will that UK now has only 1% of the world’s nuclear warheads (215) but that is still enough to wipe out all the major cities in the northern hemisphere. Imagine how many point at us when Russia has anywhere from 30-40% of the world’s nuclear weapons and ask yourself “how is that a deterrent”? Only nine of the world’s countries have nuclear weapons but to not have them does not mean we will face doom. Germany, Spain, Italy, Greece do not have them and have they been attacked? All of these existential threats face us, so where are all our peace poets? We need more of them. It is a huge responsibility but I’ll never stop writing for forgotten people until the last breath is drawn from my body.

Coventry is a city that suffered terribly from bombing in the second world war, symbolised by the destruction of Coventry cathedral. Is that legacy an important part of your work and inspiration?

Partly, yes. My eighth book Phoenix is out in 2021 and will be translated into German by Thelem University Press and launched in Coventry’s twin city of Dresden which, like Coventry, suffered, with a far higher death toll (approx 25,000). Fragments of stained glass catch the light in the ruins of the old cathedral in Coventry - it is a place of hope, rebirth, forgiveness and through that a sense of defiance that war can never destroy the humanity in us. Phoenix will be launched in Dresden and I tour there in September with a new friend Rainer who lives in Dresden and who I owe this book to after he read my last book published by Knives Forks & Spoons Press, The Unknown Civilian. We as a species are always in conflict, whether that is an atomic bomb survivor battling the war inside a body of keloids or cancer or a paratrooper with crippling PTSD or a refugee at a resettlement hotel in England who is spat at for “being here”. Most of the refugees you see are the ones who could pay to get here. Imagine those that could not. Those refugees could be me or you. Many were doctors, warehouse workers, office workers. 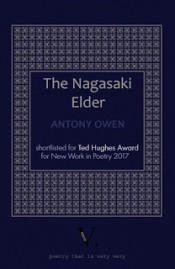 Tell me about your visit to Hiroshima, and the collection that resulted from it, The Nagasaki Elder, which was shortlisted for the Ted Hughes award for innovation in poetry.

I left the purest part of my spirit in Hiroshima. It broke my heart yet healed me all in six days. Hiroshima was a place I have wanted to see since I was 11 years old when I watched Threads by Barry Hines about a nuclear attack on Sheffield. Back then nuclear war was a very real threat and I discovered Hiroshima because of Threads. I can only describe Hiroshima through poems to do her justice, so here you are:

In the avalanche of cumulus

I saw them in the foothills floating as rain.

The clouds were like poems burning at the edges,

the tiger-eyed sun was not itself fading into better stars.

Nine thousand feet up at night we descended in breaths,

I felt the boy's last gasp as he fell apart like plasticine,

the umbrella makers scream as the tyres hit tarmac.

nine thousand feet up I watched it all unfold

and streets were a bleak tinsel, then mountain black.

I have dreamt of this place so many times

and used to sleep with the light on

but now I’m awake in darkness.

In Hiroshima no one writes poems about trivial things,

they have seen worlds end on every street

they have walked bones in buckets,

they have found them in trees

In Hiroshima a student guided me home when I was lost,

her pumps were gum-grey with a scuff of fresh blood.

She walked me to the breasted ground of bodies,

it was there I suckled air deep into my lungs,

so deep I drew a fly that I swallowed like black rain.

Who are the poets that have influenced you? Do they include some well-known ‘war poets’?

Oh my, many. I am more interested in modern poets plus music and film are equally inspirational to me. Bernadette Cremin was a game changer to me early on with a gift of combining poignance, humour and honest into her observations of place and self. Wendy Pratt is one of the bravest and complete poets I have read. Liz Berry is the standard and when she reads she pauses the world. Helen Ivory, Raymond Antrobus, Luke Wright, Merryn Williams, Jacques Gaucheron, Martin Figura is a joy to read, Roy McFarlane, Dave Lordan is a force of nature, Martin Hayes and Jamie Thrasivoulou for bringing a looking glass into working-class writing, Joe Horgan who was a huge influence and support to me as a poet and person. Ruth Stacey, Katy Wareham-Morris, Leanne Bridgewater and a lot of et-cetera which houses many more. Obviously Wilfred Owen, Bruce Bain, Ruthven Todd, Siegfried Sassoon, Vernon Scannell. The most moving war poem I have ever read though was by Jerzy Ficowski and it is called ‘A Prayer to the Holy Louse’.

How have you coped with lockdown?

I am a bit of a loner but it has been tough. Good coffee, good whiskey and lots of hugs from my girls.

Philip Larkin grew up in Coventry, but left and was dismissive about it afterwards in his poetry. Do you feel differently towards your home city?

I like Larkin’s poetry but have no time for racists so I will dismiss him, which is poetic justice. 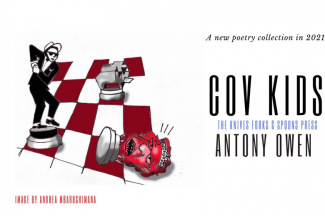 Your latest collection Cov Kids sounds like a new departure … what’s it all about?

In some ways, maybe – however, Margaret Thatcher’s Museum which I wrote in 2015 was pretty badass like Cov Kids. I guess Cov Kids is my love letter to Coventry as a place and how that place makes us who live there what we are. The “reported” Coventry is much maligned and stigmatised as a city that suffered so I wanted a book that was very street and honest. Kurt Sutter once said of a character’s demise that he had had written of, that she had to go out very much in the way of her inhabited world, and the world she had grown up in was not pretty but honest. Cov Kids combines poetry and prose, but also it’s very coarse but lyrical. Imagine a man composing a scruffy orchestra with broken instruments, yet somehow those instruments despite not looking the part still let out this beautiful music with the odd unexpected discordant ending to surprise the audience. My friend described it as a book of sandpaper really, smooth and rough but it re-planes the rough edges put on display by the media and showcases the “grain”, the DNA of who we are, with all the hard knocks but also the love. A brutalist grey architectural skin Cov wears has become grey because of mixing black with white and then grey is born. Grey is my motif for multicultural Britain and we define our country - not some feckless fool in parliament who has never known our world, our stresses.

For signed copies of any of Antony's collections email your order request to antony.owen@hotmail.co.uk

'That which we are, we are': Tennyson quoted in chancellor's Budget speech in Commons ►