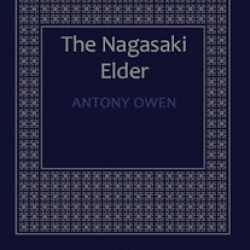 Many of the poems in this collection are about two moments in history that continue to haunt the world – the atom bombs that were dropped on Hiroshima and Nagasaki in Japan in 1945. The two bombs, nicknamed Little Boy and Fat Man, to this day remain the only use of nuclear weapons for warfare. Yet there have been several moments of crisis since Japan’s surrender and the end of the second world war when humanity has feared they could be used again – and we are caught in another such moment right now.

Antony Owen has been to Japan, to talk to remaining survivors of those terrible events, and his poems thus serve as a crucial reminder of what actually happened on those days, while also possessing a strange, remarkable beauty. The first line of the opening poem ‘The queen of new Hiroshima’ talks of a playground “where children vanished into black magic … where fingerprints remain on rails, heaven denied”.

Owen has titled another poem ‘Pearl Harbour’, the scene of Japan’s surprise attack on the American fleet that prompted the US to declare war. But this poem is about Hiroshima, where “there are many pearl harbours  / burning in waters of survivors’ eyes … / oysters prised open through grief.”

Not all poems come with such a metaphorical sheen. The opening lines of the ‘The last fare collector of Hiroshima’ tells it straight: “They found her fingers in a jelly of yen, / her skin one with the standard issue fare-bag”.  The blast brought lasting reminders:

Weeks after, this girl with the handprint face

explained that she was counting to ten, then a flash

printed hide and seek on her face.

A mother talks of her shadow of her son, a dark outline the only trace of him that was left behind after he was vapourised in the blast:

I have tried to erase him for sixty-four years

and my wrists are tired;

I have scrubbed the darkness of my son

So he could be buried at last in sunlight.

(‘To feed a Nagasaki starling’)

‘Honkawa School’ returns once more to that moment of horror, as Owen witnesses Hiroshima pupils playing: “When I set foot in your heart, / my steps were beating for all the dead school children, / cremated where they pat-a-caked.” Yet it ends, thankfully, with optimism:

Today the children made a sandstorm from their playground;

a boy kicked a ball, missing the goal,

In the poems ‘The stars that wandered Hiroshima’ and ‘Nisei’, Owen looks at the argument put forward by America’s President Truman to justify the dropping of the atom bombs, that it was intended to shorten the war against Japan – as it did – and save the lives of thousands of Americans who would otherwise have had to fight their way across Japan’s mainland. It also arguably saved the lives of thousands of Allied prisoners of war of the Japanese - of whom my father, a captive in Thailand, was one. Owen’s reply in ‘Nisei’ is thus:

We build our nations from scripted words –

“We have used it against those who have starved

and beaten and executed American prisoners of war …”

- and yet no child did this in the over-bombed cities.

These speeches of men playing Gods who unmake

are written from the ink of human darkness.

According to a number of accounts, Nagasaki’s Fat Man bomb was named after Britain’s war leader Winston Churchill, who supported the US plan to drop atomic bombs on Japan. (Other accounts suggest that it was originally named after the Sidney Greenstreet character in the Hollywood movie The Maltese Falcon). Owen’s poem ‘Fat Man’ mentions Churchill’s cigars and brandy, as well as the bombing of Dresden, before ending: “The Nagasaki bastard / they named after you / whistled like a soldier, // bloomed for the lotus flower, / your carbonised legacy, / Fat Man, fire, criminal.”

Antony Owen grew up in Coventry, a city severely damaged by German bombing in the second world war. In a second section of The Nagasaki Elder titled ‘The Human Blitz’, there are poems looking at other civilian casualties of indiscriminate bombing, including Dresden, Basra, Sangin in Afghanistan, and the fallout victims of the Soviet Union’s nuclear accident at Chernobyl. I learned from Owen that ‘Coventrien’ was a word introduced into the German language after the Luftwaffe’s raids to mean “to completely destroy a city from the air”.

Owen reminds us that death is being delivered from the sky daily around the world, regardless of the awful portents once more in the far east. His poem about Sangin, ‘Sky for a silent boy’, can effectively stand for all today’s victims of casual, unthinking targeting, in its focusing on death by remotely-controlled drone:

And when the drones came, flowers closed their mouths,

In 1946 the New Yorker magazine sent journalist John Hersey to investigate what happened at Hiroshima. His conversations with survivors formed the basis of a 30,000-word article to which the magazine devoted an entire issue, dropping its usual cartoons, fiction and verse to do so, and introducing it thus: “The New Yorker this week devotes its entire editorial space to an article on the almost complete obliteration of a city by one atomic bomb, and what happened to the people of that city. It does so in the conviction that few of us have yet comprehended the all but incredible destructive power of this weapon, and that everyone might well take time to consider the terrible implications of its use.“

The true death toll at Hiroshima and Nagasaki will never be known, but those who died immediately and in the weeks and months afterwards are thought to number well over 200,000. Seventy years after the atom bombs exploded, Antony Owen went to Hiroshima, in 2015, and plans further trips to Dresden and Nagasaki in 2019 to “continue his dedication to contemporary war poetry and transmitting art with a social conscience”. As the world watches today in apprehension and disbelief as test missiles from North Korea pass over Japan, his motives must be applauded. Owen has taken care to distil his anger and pity. His poetry is not in-your-face protest, but crafted, lyrical, and resonant.

◄ Lives in transit: travellers' tales beside the Betjeman statue at St Pancras