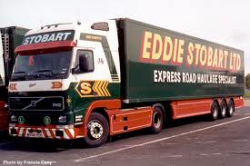 Forget those nonsense conspiracy theories about microchips in your vaccine, 5G masts, Hillary Clinton and the devil-worshipping paedophile ring; even David Icke as the Grand Lizard. The real conspiracy is headed by ES.

Ubiquitous, as in a crowd, invisible to sight,

Relentless rolling through the day, anonymous by night

Corporately liveried in red and green and white

Just who can stop the juggernaut that’s Eddie rolling on?

From Tebay up in Cumbria and south down the M6

And every other major route where you might get your kicks

But Eddie took his pick of them – the best have now all gone.

Siren sisters one and all raised from the Dark Domain

Protect him from the wider world where fortunes fall and ebb;

At Toddington and Watford Gap and Leicester Forest East

His spotters mark their notebooks with the number of the Beast

And at the Mecca of Carlisle where feeds the frenzied feast

He pulls the strings of Empiredom from seated in his web.

His fanbase does not care for Bentleys, Fords or Cadillacs

A Lotus or Bugatti or those speedsters of the tracks

Their tools of trade are notebooks, cameras, Primark anoraks

His drivers in green uniforms so smart in shirt and tie

A job they take their pride in – only heroes need apply;

All corporate ambassadors who each exemplify

The chivalry and valour of these modern roadside knights.

And progress is evaluated on strategic plans

To monopolise provision of containers, trucks and vans

That run the roads and motorways from Crewe to Kurdistan

So populous and commonplace not worth a second look:

With fleets and fleets of vehicles all bearing one proud name

And line on line of stormtroopers all liveried the same

Then children on long journeys play a different backseat game

Of keeping conk for lorries that are not a Stobart truck.

Quite so, MC. I had the idea of compiling one of those I-Spy books for kids for landmarks along every motorway. But I suppose a lot of them like Markham Colliery near Chesterfield would not exist now. And the replacement industrial warehouses look pretty much the same and, in any event, don’t have the same kind of romantic back-story.
The wagons are still there, Greg, although I suppose the “chicks” named on them will be in their 60’s now; it’s drivers there’s a shortage of.

Just to think...I could have given Ian Allen's loco spotters a run for
their money by starting a "Spot the Pickfords" removal lorries
craze on those pre-motorway days of my youth! 😏

And more difficult to spot these days, alas.

Thanks for your thoughts, Stephens A and G. And for the Like, Holden.

They're like the buses of the motorway, John, all over the place! People bip their horns & take photos...? I don't get it, they're hairy arsed lorry drivers taking shit to places??

It's true, they get to the strangest places.