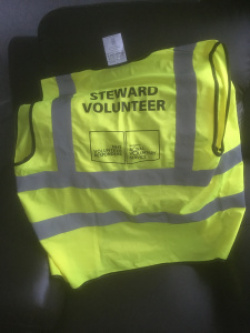 They made the news some little while ago.  Les Gilets Jaunes or Yellow Jackets as it translates.

They emerged in 2018, protesting about something or other.  But you can’t take French street protests too seriously when they happen every other day.  It might have been over pension reform or air traffic control or lorry drivers or the price of frogs’ legs – it’s all pretty incomprehensible to anyone not French.

But I have to confess that I have now joined their ranks.

I’ve witnessed Gilets Jaunes as they protest on my TV

Blethering on and wrauping on les rues de gay Paris

Was it over pensions, poissons or their liberte?

So frequent I lost interest, I confide;

I wear it sans embarrassment and hold ma tete up tall

As Volunteer Steward at a Vaccination hall;

I wear my Gilet Jaune with English pride.

John - Yes, probably best to bite your lip until the needle goes in.

M.C. Glad to hear you know Lord's well. I have missed it for the last couple of years. I was thinking of the incident when David Steele got lost on his way out to bat and ended up in the basement, thus risking being timed out in his first test innings!

JC - as I like to say: Onwards and upwards (but not too much of the "upwards" just yet!). 😃
SG - stepping across the flagstones that marked famous names like William Wilberforce was in itself worth the need
to visit Westminster Abbey for my second jab. As for Lords - I used to do duty there
during test matches so it was a familiar place in so many ways.

Thankyou, Stephen. I suspect the hi viz is designed for more pencil-like people than me.
What never ceases to amaze me is the number of people who want to argue - "I don't agree with it but the doctor made me come" "It's all a hoax you know" "I don't want it really"
I smile sweetly and think "So why don't you fuck off".

Entertaining, John. And well done for the volunteer work. Will a larger size become available? (I think I know the answer).

The violence of the Gilet Jaunes protests was very disturbing. It started out as a group complaining about fuel tax increases and then every habitual anti-Paris elite discontent from the far left and far right seemed to jump on board. Sadly for the eternal anti-Macron moaners, the increased vaccine take-up and overwhelming support for the vaccine passport suggests they don't speak for most French people.

M.C. I envy your august vaccine locations. I hope you found your way around Lord's better than David Steele in the 1970's!

Thanks, MC. I have surely worked my passage to Heaven. Hopefully not too soon.

JC- thanks for the chuckle-ready lesson in Franglais. And well
done to you on behalf of us "double-jabbers" across the country.
I had my first in the hallowed halls of Lords Cricket Ground and
the second in the even more hallowed confines of Westminster
Abbey. History and hyperbole irrevocably entwined!! 😃

Thanks, Greg. Personally, I quite like the idea of chain gangs. Consequences, always consequences.
And thanks for the Like, Holden.

Good man, John, good on you. Just as long as you don't find yourself on one of Boris Johnson's chain gangs by mistake.