...BUT LOST TO HUDDERSFIELD 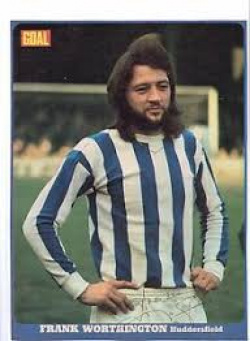 A recollection of a halcyon day in 2017 and referencing the iconic and talismanic Frank Worthington who died today.  A cowboy both on and off the pitch.

We praised the God of Yorkshire that October afternoon

It’s not a day we’ll be forgetting sometime very soon;

The scoreboard told the story – it had ended 2 to 1

We sang songs to their glory – the Terriers had won!

…but they lost to Huddersfield!

We set the years of hurt to right; our tears were tears of joy;

To raggy-taggy artisans in shirts of blue and white

Who showed that heart is all you need and spirit for the fight.

…but lost to Huddersfield.

I felt the goosebumps of the past and, honestly, I swore

I saw the ghosts of Worthington and rueful Denis Law;

But now it’s time to trade those years of former pride; instead

It’s to the future now we gaze, to better times ahead.

In twenty season’s time from now their pain will not have healed;

… but lost to Huddersfield.

So pass on this new legacy to daughters and to sons

The day Red Devils lost their tails and turned back west to run;

And etch this in your memory – October, 21st

The best of days for Huddersfield, for Manchester the worst;

They met their match that Saturday; oh, how the Red Rose reeled!

They may be kings beyond those hills…

… but lost to Huddersfield.

Thanks, Graham. Yes, we’re fine. You too?
I’ve heard said, Stephen, that Man U are both the most followed and most hated club in the world.
And thanks for the Likes, Holden, Kevin and Branwell. Also Greg and Brenda.

Past his best when he joined us at Sunderland, but he still had that swagger & style we loved.
And who doesn't love putting one over the Manchester's 😉

I hope this poem is etched over the dressing room door at Huddersfield JC. If not it should be.

Everyone enjoys a Man U come-uppance, MC. It couldn’t happen to a nicer team!

That sort of outcome makes English football the timeless leveller
that is so appealing to our sensibilities. I bet the older Frank W. would have smiled at his younger look - back in the day when shorts
were shorter and hair was longer !
.