The 'man in the cardigan' was gently ribbed by Ian McMillan. But does he have a point? 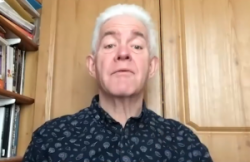 Over the last few years, I have got out of the habit of attending the TS Eliot Prize readings at the Royal Festival Hall at London’s Southbank Centre. My growing involvement with local, grassroots poetry has perhaps left me less engaged with the ‘high-end’ version, as has my increasing inability to get to grips with the ‘difficult’ contents of the Poetry Society’s quarterly Poetry Review.

Which is a shame, because for a number of years attending the TS Eliot readings, like going to the Forwards, had been a big poetry occasion. You would bump into a few poetry friends, for sure. On the other hand, unlike the Forwards, you did not find out who had won on the night. That information was traditionally given out at a more private gathering the following evening.

But we have been deprived of many poetry occasions, big and small, during Covid. And so I was happy to shell out £7.50 for a virtual ticket to an online TS Eliot Prize night on Sunday, especially as the winner was going to be announced at the end of the readings, for a change. And Ian McMillan, pictured above, was still in charge as compere.

The ebullient McMillan, presenter of Radio 3’s The Verb, is very much a notable poet in his own right, as is his award-winning son Andrew, one of the TS Eliot judges last night, and also the judge of Write Out Loud’s recent Beyond the Storm pandemic poetry competition. But Ian’s special quality as compere of the TS Eliots over the years has been to succeed in transmitting his genuine enthusiasm for and appreciation of the shortlisted poets in layman’s terms, in his man from Barnsley’s no-nonsense, northern style.

Thus he described JO Morgan as “the king of the book-length poem”, with “a marathon, not a sprint approach to poetry”.  In talking about Sasha Dugdale, he observed that “a poem can be anything you want it to be”.  Natalie Diaz’s poetry contained, among other things, “a great poetic celebration of anger, at the destruction of Native American culture”. Glyn Maxwell employed language “as serious play … existential hopscotch”, but was also praised for his love of form, rhyme and rhythm. With Ella Frears, said McMillan, “poems of identity and poems of lyric slog it out … sparks fly”. You could take Will Harris’s book and “use it as a map … find extraordinary things you never knew you were looking for”.

Nevertheless, after listening to the poets, and despite Ian’s best efforts, I was left with the distinct impression that poetry has indeed become more ‘difficult’ since I last attended the TS Eliots – more cold, more cerebral, more intellectual. Perhaps I’m just getting old, and losing my faculties. Perhaps I have pandemic brain-fog. Or perhaps I am like, not the man on the Clapham omnibus, but the man who Ian McMillan said had attended a workshop and complained: “Well, it’s all a bit modern, isn’t it?” He also confided that the man had been wearing a cardigan, although I’m not sure how relevant that detail was.

I was dispirited earlier in the week at the sniffy reaction of some in UK poetry circles to Amanda Gorman’s wonderful poem at the inauguration of President Biden in Washington. One poet said it was more of a prose-poem, which it palpably wasn’t. Someone in the rightwing Spectator magazine hated it - but then, they would, wouldn’t they?

Many congratulations to this year's TS Eliot Prize winner Bhanu Khapil. But I do look forward to the day when a performance poet triumphs at the TS Eliots or the Forwards, someone like Amanda Gorman. One day, one day.

If you missed last night's poets, Ian McMillan will be presenting readings from collections shortlisted for the TS Eliot Prize on Friday 29 January at 10pm on BBC Radio 3.

Online pictures of the shortlisted poets

◄ How to Make Curry Goat: Louise McStravick, Fly on the Wall Press

Splendid Greg. And brave. You've just ficked up your chances of a TS Eliot. If we all fired at the same time would they sink?

Ella Frears' collection, 'Shine, Darling' is exceptional. I'm disappointed that it didn't win this or the Forward, 'First Collection'.

Thanks, Greg. Interesting article. I may have a cardigan somewhere, although I can't remember ever wearing it. I hope that I would never dismiss something just because it was "a bit modern". The audience members who protested against Stravinsky's Rite of Spring would look rather ridiculous now. Perhaps time gives us a perspective.

Intellectualism has a place in poetry or any other art form, but as you say, a certain coldness can repel the reader.
Eliot himself was steeped in learning but (at least to me) his poetry was never cold or inaccessible (although you have to work at it).

Yes, some of the reaction to Amanda Gorman disappointing but I am sure she has found a wider audience. Her books seem to be selling well.

The reference here to "high end version" (of poetry) indicates a
sort of schism in what's written by poets for poets and what's written and touches the rest of us. It is apparent that there is a whole
world of mutually reliant, mutually admiring writers turning out stuff
that might be termed "competition" content - aimed at the appreciation of the like-minded and dismissive of anything that deviates
from what "they" consider to be "poetry".
Modern classical music has seen a similar situation for some time.
An old saying comes back to mind:
The intellectual seeks; the wise man has found.

From the man in the Clapham cardigan.