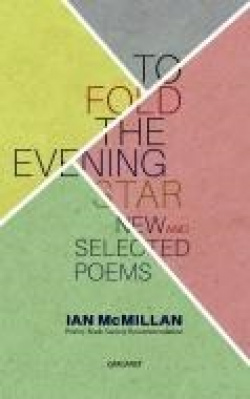 Barnsley-born Ian McMillan is an untiring advocate for poetry, as presenter of BBC Radio 3’s weekly  programme The Verb. He has been poet-in-residence for English National Opera, The Academy of Urbanism, Humberside police, and Barnsley FC. He works in schools, writes a weekly column for the Yorkshire Post, and has compered the TS Eliot Prize readings in recent years with sharp insight, humour and gusto. He also tweets wry observations from railway stations and carriages as he goes about his business.

But there is another side to McMillan, that of a poet with a body of work to his name. If you’re expecting a collection of upbeat verses from a Yorkshire cheery chappie within To Fold the Evening Star, an edition of new and selected poems from Carcanet spanning more than 20 years, you’d be disappointed. There is high-spirited humour there, for sure, often of the surrealist variety; but there is an underlying seriousness, too.

Here’s an early example of his humour. ‘Ted Hughes is Elvis Presley’ from his 1994 collection, Dad, The Donkey’s on Fire,  imagines a runaway Presley faking his death, escaping to London, encountering “a big guy … with a briefcase”, knifing him with suitable violence and assuming his identity:  “Outside a fox peers at me, / I sing softly to it, / strumming my guitar.”

McMillan was born in the village of Darfield, just outside Barnsley, where he still lives. There is no particular sentimental attachment, or unblinking Yorkshire nationalism: one of his earlier poems, ‘Visit’, set in a hospital room, sees Barnsley “laid out like a stroke victim”. And from ‘The Er Barnsley seascapes’: “Put it this way; / Darfield was mentioned in the Domesday Book. / put it like this:  a passing mention, / more of a mutter.”

Something about his own poetic beliefs and mission may be discerned from ‘Jesus Died from Eating Curtains’, in which the narrator cries: “I am concerned about the / state of Poetry, hear? / I’m concerned about its / lack of ambition, about how / you don’t often see the word / galoot or the word galosh”.

There is both poignancy and a darkened vison in the father-and-son poem, ‘Snails on the West Shore, August 1991’: “My son was frightened, looked down / at the snails crossing the path, looked up / at the gulls slicing the sky’s silence, looked / at me, saw the boy I once was, the slow / old man I would become”.

Anyone who follows McMillan on Twitter will know that he travels on trains a lot. I believe he loves them, and enjoys observing his fellow travellers. The occasional pure joy of train travel – a moment of almost religious ecstasy - is captured in ‘Happiness on the First Train from Barnsley to Huddersfield’: “The train pulls out / of Penistone Station, across that impossibly / beautiful viaduct that I can never / remember the name of, and the light / is arriving in the sky as if by slow train, / and now I can remember the name / of the viaduct and the name of the viaduct is Happiness.”

Another railway poem, ‘Essential Engineering Works’, has a symbolic train halting “somewhere in the lit midlands”, perhaps a nod to Philip Larkin’s stop at his old home town of Coventry in ‘I Remember, I Remember.’ McMillan’s poem is about something else; a poem that is “stuck on the line”, and is full of apologies, and is waiting for something to happen, so that it may “lurch into life”.  Another link to the Larkin poem, maybe, but more optimistic, somehow.

In his time in Barnsley McMillan has watched the surrounding coal industry – an intrinsic part of northern landscape and culture – contract and die. His poetry is too alive to be downcast by this, although he can’t ignore it. ‘He Finished Up Down Nine-Clog Pit’, one of his new and uncollected poems, is a ballad of stoicism, but with flashes of anger: “And then he was the old man / With on-one left to talk to / To do the job like clockwork / Cos the jobs had all been outsourced / And the hours had all been zeroed.” Another poem, ‘The Grimness: BBC Radio 4, Tuesday, 8.30pm’, satirises media perspectives of the north, and ends: “Do you think I should do that bit at the end again? Let’s listen back. A man was trying to breathe in a house two miles away. Bloody deafened me, pal.”

The final poem in this volume is also the title one, ‘To Fold the Evening Star’. It’s classic McMillan, turning the everyday into the transcendent. The 10-year-old McMillan asks for an Evening Star at the corner shop, “in a voice / That cracks and breaks with fear”.  He goes on: “I fold up the Star, holding it loose / In my child’s gentle grip; / This star lasts longer / Lights my way home.” I’m unsure about the fate of McMillan’s local Evening Star, although the Sheffield-based Star newspaper closed its Barnsley edition in 2008. Evening Star also happens to be the name of the last steam loco to be built in Britain.

The seam that McMillan mines is the surprising beauty of the day-to-day; he delights in words like galoot and galosh; he writes poems about Yorkshire puddings; but this apparent court jester, like any joker, is subversive, too, in the way he sometimes upends expectations. Some of his poems appear almost as wild, random jottings, that might have been noted down quickly while glancing out of a train window.

Others have a resilient sense of wonder, capturing northern images such as the  rollercoaster of street lights that you often see surfing hills and valleys: “All descents / into lights / are impossibly beautiful”. (‘Descending into Chihuahua, Descending into Barnsley’).  And they sometimes have a toughness that conjures up for me an image of a kid on a street corner in winter, pavement glistening with rain. A Hovis ad? Perhaps. But also an image to set your teeth chattering, and make you hurry home for tea.

◄ 'Weather had toughened the soft leather, and one lace had broken short'