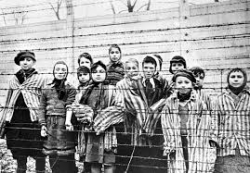 In 1999 a retired Ohio car worker (but Ukrainian by birth), John Demjanjuk, was accused of being one of the Trawniki at Sobibor concentration camp. These were Eastern European collaborators who assisted in the extermination of Jews on behalf of the Nazis.  He was extradited to Germany to stand trial for war crimes and subsequently found guilty and sentenced to 5 years imprisonment.

But it has always struck me that all our high minded principles aren't worth a can of beans unless they come at a price.

They took us near Vinnytsia in 1941

Supply lines long since severed, ammunition all but gone.

We numbered 97 boys, all from Podillia’s lands

They shot a half of us right then as we raised our hands.

They ordered us to strip our dead beneath that wintery sun

I’ve asked myself a thousand times, “What would you have done?”

They shipped us north to Poland along with thousands more

And onwards to this barbed-wire Hell that’s known as Sobibor.

Inside these walls of horror there is no Wrong, no Right

Just wake at dawn; make sure that day you live to sleep at night.

And do just as they bid you to, as all of us have done

I’ve asked my friends a thousand times, “What would you have done?”

Then hauled the bodies on the cart and heaved them in the pits.

And begged their souls a thousand times, “What would you have done?”

Indeed, Stephen. Let’s hope we never have to find out.

The harsh reality of war. Do or die. Let's hope none of us have to make such decisions in our own lives.

Thanks, Ray. I worked for many years alongside a bomber pilot who had been shot down and spent several years in a Nazi POW camp. He was virtually unmotivatable. When he told us that for three years he woke every morning not knowing if he’d Live to see the end of that day, so that everyday since was a bonus for him - we understood why.
I remember that he also said the most terrifying days were immediately after the Russians relieved the camp.

Another example on a less direct level would be the loco drivers and firemen who drove the trains to the camps - in fact the whole process of running camps relied on slaves and a hierarchy based on fear and coercion. As for choice in the matter - life or death would focus the mind . Morals in shreds through war and its crude lack of options; It serves no purpose to moralize as you say at this safe distance. I can't usefully comment on the man in question but it was a perennial one for many years . A thoughtful piece John.

Thanks for your thoughts, Stephen. I am not familiar with either film. I agree that anyone resisting in the way you describe deserves the highest admiration for their courage. Fortunately, for the overwhelming majority of us, we never need to find out!

It's an interesting question, John. To me it is remarkable (and life-affirming) that so many people risked their lives resisting occupation or died refusing to give information under torture. At the same time, one can understand soldiers threatened with imminent death deciding to follow the orders of their captors, however repugnant.
The Marcel Ophuls film, the Sorrow and the Pity, shone a harsh light on the motives of collaborators, while Jean-Pierre Melville's The Army of Shadows revealed the brutal heroism of the resistance, who had to be willing to sacrifice suspected weak links or informers in their own ranks.
A big, thought-provoking subject.

I’m sure that many in the service of the Nazis would have undertaken their duties with relish. But at the same time I cannot believe that, on pain of our own death, any of us would not have done as we were bidden. It is easy from the comfort of not having to face that choice that we all recoil in horror with our high minded principles.

Not sure what brought this back but it poses a seemingly non-answerable question. Time, place and circumstance are hugely
relevant - added to which the self-survival instinct comes into play
when civilised thinking and behaviour appears lost forever to the
forces of barbarism. If I recall correctly, this individual had obtained
entry to the USA illegally - hence his removal. The trial that followed
was an extension of the discovery of his identity and actions that
demanded judgement. More symbolic than anything at that stage perhaps. But there are many instances of the recruited from certain
lands being more brutal than their employers. Nearer to home, the
Vichy police in France were looked upon with astonishment by the
Gestapo for the brutal methods they used against their prisoners,
as often as not their own countrymen.