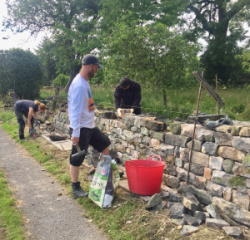 substantial as the one before you now.

It must survive hard frosts; wild gales and squalls;

First we think about what it’s for.

The purpose might be to keep your chattels penned

or keep intruders out.

It may define the boundaries of your tract

or simply be aesthetic.

Consider this the “message”.

Then we plot its layout

(plot, of course, is synonymous with narrative).

It must begin one place and end someplace

which may be the same place

or may be any place other.

Do we bend it around obstacles

or grub the obstacles out?

will we take the easy route

by following the contours,

or head direct for our destination

up and down the slopes?

Remember: there is always more than one route

from intro to conclusion!

Then we lay a sturdy foundation,

an integral trope to underpin the entirety.

It must run solid and level

from one end to the other.

Look at the one I’ve put in here.

Stand on it, jump up and down on it:

it should not move.

scattered   lying   words   Stones wall. vocabulary are  randomly   of   the

To do this we arrange them in “courses”,

by which I mean horizontal lines

which should fit together precisely,

each distinct and self-contained

but nesting snugly with its neighbours.

A good wall is in fact two walls:

two “faces” that lean in towards each other.

Two-facèdness in people is considered a failing

but this ambiguity in our wall makes it sturdy.

It’s vital we station some through-stones to couple the faces:

and hold it together. They must be at regular intervals:

almost a rhythm but better described as a metre.

Positioning them too much apart you will diminish the effectiveness of them:

of rock that pack the void between the faces,

articles as vital as the rest,

conjunctives in the grammar of this craft.

You must ensure the hearting’s firm, compact,

and always filled up level with the course.

Then finally we mount the crowning glory:

the heavy capstones I deem mandatory

(though most of my compeers insist they’re not

and all their walls collapse for want of them.)

The capstones may be raw, unfinished boulders

to lend the wall a thrill of rugged wildness,

but if you are a waller who’s obsessed

with compass curves, your capstones will be dressed

diverse in forms as any poet’s dreams:

they're wheels or domes or drums, or backward smeared

with such deep moss you can’t discern the shape

but lodged within, a block asserts its weight:

it clamps the edifice intact by pressure.

For stock-walls, matching caps may coincide

but if less for utility than pleasure

don’t place same-coloured capstones side by side.

and chuck it all together any how.

The past, no doubt, contained its share of fools

but many wordstone walls are centuries old,

and fit to last until the sun burns cold.

Definitely not, Don. It’ll fall down and at that height it could kill someone. I assume you’re talking about an actual wall here and not a metaphorical poem (although I must say, some people’s badly constructed poems have almost killed me in the past!) You need to dig out the topsoil until you reach a solid subsoil layer or bedrock, and build your first course below ground level.

Hey John, where you been? I haven’t seen anything from you on Facebook since the start of lockdown. You all right? And yes you’re correct: it’s a good thing my customers don’t know what I actually do all day!

Good luck with the wall, Don. Remember it needs a good firm foundation whatever type of wall it is!

You’d get it built quicker, Tim, if weren’t scribbling down you poem instead. 😍

Clever Tim. Imagine a bit of time and thought put into this one.
I shall have your instructions at hand for my next garden project 'Wall Dun by Don'. Now what was your advice there Jennifer?....

Thanks Jennifer. Yes, I should have thought of those but it's a long and complicated enough poem already!

Nice one! Liked the metaphor of the wordstone wall. Think it's also important to eliminate any stones which don't fit well, or don't support the weight of the ones above, and pare it down removing anything not essential for the whole.