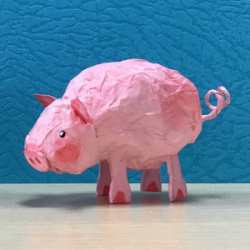 Not the most astute critique, I know,

but we were just fifteen. The Pink Floyd song

would volley from the mouths of my home gang

to cast a cagey eye on us then slew

away from those street corners where we’d hang,

summed all the insurrection we dared do

(though never quite so loud the pigs might hear.)

You could be wondering what these cops had done

to rouse the artful surrogate for jeers

so read on till I’ve made the reason clear -

we had a case for such a carry-on.

Ironic truth: my Dad was part to blame,

a Parish Councillor who did his bit

to shield our village from the insidious rot

the village “Pig Patrol” - was largely got

through Dad’s unstinting lobbying for it.

For local kids it was a huge arse-pain.

the nadir was illicit cider swigged

by under-ageds, or drunks behind the wheel,

so cops bigged-up what felonies they twigged

and we made easy targets for their zeal.

Just hanging out with friends could get you “pigged”.

I got my equitable share, as did my mates.

The worst, I still recall, with Spaz and Ron

when Skip entrusted us the keys to plan

our Scout troop’s happening at the Church Hall Fête,

a meeting that went on into the night

till, ambling home beneath a silvery moon

the rozzers stopped us and we faced a man

engorged with swill of arrogance and spite.

What’s our names? Where’re we going to?

Where’ve we come from? The latter question lead

to apoplexy from the Boy In Blue

when Spazza piped up honestly and said

“the Scout Hut”, but the copper’s view was glue:

“You’ve been at the allotments, wrecking sheds!”

No amount of pleading could persuade him

that we were dutiful, upstanding Scouts.

He oinked at us like we were little shits

and every plea of innocence just made him

He let us know he’d marked our cards as louts

and he’d’ve nicked us but for an alert

just then who’s urgency was overriding.

So that’s the reason my teen attitude

to flatfoots held some leeway for improvement.

I reckoned they’d be uniformly rude

as that aggressive plod. My thinking was imprudent

but rooted deep and not to be reviewed

till Toxteth, where I slummed it as a student.

Ironically, they got me there red-handed.

I’d supped till chucking-out time at the pub,

found first my flat door flat and next got nabbed

by half a dozen bizzies who demanded

to know the person nurturing one hundred

established in my flat-mate’s room? No fib

leapt quickly to my tongue which was encumbered

by half a dozen pints I had consumed,

and in no time the fuzz exacted from

my addled brain the detail that this room

was quarters of my friend (let’s call him Tom),

currently at his folks’. I had assumed

the cannabis carer’s role whilst he was gone.

A cruel happenstance, a dick explained:

the bacon had been called about a break-in.

round the burgled flat and ascertained

the presence there of certain plants which tend

to yield illicit substances by smoking,

and though I was the victim they’d be taking

me to their place, for a long weekend.

I weirdly thought the ‘tec a decent bloke.

Heroin was what he hoped to beat.

He didn’t give a fuck what students smoke

so long as they don’t sell it on the street.

“Had ‘uniforms’ not beat us here,” he joked,

He let me get to bed and sleep it off

on trust I’d turn myself in, come the morning.

I didn’t sleep a wink, my cortex churning

with visions of my life mashed in the trough.

But “Hope” Street was just that, and I retrieved

a little confidence whilst promptly learning

that every snout does not have porcine leanings

contrary to the wisdom I’d received.

Of course they had to deal with greater crimes

than students farming weed; in retrospect

they probably thought we were a waste of time

when they had all the city to protect.

But rather than dismissing me as slime

What I noticed first was coffee mugs

they used for morning break: each had a pig,

some in farmyards, others wearing wigs,

some were blowing whistles chasing thugs -

it must’ve been the station’s running gag.

“Do Biochemists feed their plants with drugs?

Is that the reason these have grown so big?

You should be doing Botany!” they ragged.

When I declined a lawyer they seemed quite content

with my changed story now my head was clear.

then I was free on bail till Tom appeared.

At once I phoned the twat and begged in torment

“Get ya fuckin’ arse back over here!”

Fate was on my side, ‘cause Tom agreed

to commandeer all blame and take the flak.

His altruism got me off the hook.

The Judge took pity on him and decreed

a discharge, with the hope his science degree

would help erase the ink stain from his book,

since he was middle class (and was not black.)

The Beak gave one wig-nod and we went free.

And for my part I walked out from the court

persuaded that the filth were not all scum,

and might’ve lived my life out with this thought

no premonition of what was to come.

drunk again I am not proud to say,

I lurched at random like a ship at sea

rolled by waves without a navigator,

only kept from crumpling in the gutter

by Jerry, my good friend, as drunk as me,

through the streets of Notting Hill, as high

as any brace of raving midnight nutters.

Quite where we were heading I don’t know

but veering into Ladbroke Grove, we ran

upon blue lights that strobed a vile tableau.

We saw a black guy crushed against a van

with twelve bluebottles buzzing for a go

at hammering the life out of the man.

I made my mind up quick what we should do:

“Let’s get the fuck away from here!” I squawked.

But Jerry had a mouth that never shirked

a chance to welly-boot the Boys In Blue.

The subsequent few minutes are a blur.

Jerry launched a diatribe that irked

the Thin Blue Line enough to drop their work

and centre on the author of the slur.

My friend went down beneath a rain of fists.

I grilled a gammon, “What you done with Jerry?”

I sensed the man could pulp me to a jelly

but knew my rights. “So is this an arrest?”

“What’s the charge?”  I slewed across the floor

of a Black Maria, briefly smelling

round one eye, was there. They slammed the door

and sped to Paddington Green. A puff-faced, dour

desk clerk took our names and had us spilling

our pocket contents out, his trotters sealing

all in labelled bags, his look a glower.

The passageway resounded with a din

of souls in torment, baying rage and pain.

They marched us to a subterranean den,

charged with drunkenness. We were detained

but who the black guy was, what he had done,

and where he went we never ascertained.

A regular had been banged up there first:

a local vagrant camping in the cold

who’d get arrested any night he could.

Within an hour my throat was raked with thirst

reacting to my bounteous birthday toasts.

I banged the steel door till a scuffer stood

beyond the grill, and though our cell-mate stewed

with animus, I ordered from our host.

Fifteen minutes lagged and then the grill

slid open and a plastic cup came through.

The tramp swore blind the drink would make me ill:

“They spit in it! They’ve spiked it with pig-poo!”

But I was now so dry I took the swill

and gulped it down despite what it might do.

I stretched out on a bench along the wall

and plunged into a raw, uneasy sleep.

and laughed “This is your early morning call!”

With little cash and four more hours to kill

till tubes woke up, we trudged the freezing streets

till close enough to home that we could steep

the summit of a night-time taxi bill.

Of course, our outrage hosepiped forth in torrents.

We swore we’d shortly sue and raise the roof

but all we held was hearsay and abhorrence:

to press a cast-iron case we needed proof

years before the death of Stephen Lawrence

forced the Met to face the sordid truth.

Nowadays I view things in perspective,

or focussed through the telescope of time.

The man you see’s a more deliberative Tim,

to those whom most of us would rank as “crims”,

but whilst there’s gangs and rape and violent crime

a counterweight of justice must stay active,

and though I’ve been unjustly reprimanded

I know the perfect world for which I’ve yearned

may never have the old popo disbanded:

we must respect The Law. Through tears I’ve learned

that such respect may never be demanded:

it holds no currency unless it’s earned.

◄ The Forests will Echo with Laughter. Part 3.

Hi Tim - I was at a neighbouring central London station but would occasionally be required to perform "aid" to other stations, one of
which was Paddington Green. However, it's unlikely I was involved
in your own recollections. Speaking from my own knowledge and
experience, I can say that, if anything, the behaviour and
forbearance from those with whom I worked towards those met
in the course of that work was almost saintly, considering the
provocation, threat and actual reality of physical attack from those dealt with on any given tour of duty, often under intense pressure..
Drunks, often well-known locals, were a particular problem, not
least because of their unpredictability, but also because their
self-inflicted condition could hide underlying issues that could
be threats to health - and these can be found in reports of those
reported to die in custody. I could describe saving some of those
lives but will leave it there. Remember one thing - any officer
who courts trouble is no friend to his/her colleagues for obvious
reasons - and is soon made aware of that fact. Finally, it would be
fiction to say I never had the need to step in when things got
"heated" in certain instances but that was part of my job and I'm
more than willing to testify that it was a rare necessity among the
thousands who passed through the charge room in any given year.

Hi M.C. Thanks for your comment. I guess it’s not impossible then, that you were the actual Desk Sergeant I mention in the poem! It is telling that you don’t deny things like this used to happen.

What might be termed - "Confessions of a Wayward Youth" - or
"Confrontations With the Constabulary". I can go further back than
this though - from the "other side", but I found this well worth my time,
especially having personal knowledge of Paddington Green. There
are always two sides to every story. The "desk clerk" mentioned
would, at that time, have been a charge-room sergeant (or in
later days, the similarly-ranked custody officer) - and, take it from me,
when you've done that job for many years as I did, you've just about
seen it all when it comes to human
behaviour. One of the lads on
a former "relief" was a punk fan. Never understood why, but he was
a good lad!! Such are the strange and varied facts of life. 😉
P.S. A random thought but if Punk had
been around in Dickens' time, he might
have written about it under the title "Great
Expectorations"!! Or something similar -
within spitting distance, so to speak!