Queer punk performance artist/ poet writing about being gay, working class and British. Gaining recognition on the national and international LGBT performance poetry and queer writing scene, I have recently performed my poetry for events hosted by Write Out Loud Poetry, London Queer Writers and PoetryLGBT and in January 2021, I curated a set of queer poetry evenings for BBC Radio. My current practice fuses performance poetry and experimental film as a form of autoethnographic storytelling/sharing of personal narratives often raw, often painful but always generous and authentic. These narratives often relate to aspects of me being gay, British and working class employing barbaric wit and humour in their storytelling. Recent and future publications of my poetry include Queerlings – A Literary Magazine for Queer Writing and Otherwise magazine. My poem ‘Clever at without being Seen’ was recorded for Sometimes, The Revolution is Small, Disarm Hate x Poetry' project by Nymphs & Thugs Recording Co. UK. Recent poem 'George' was published by Coin Operated Press. Recent poem 'Juniper Park' was published in Spilling Cocoa. Dr Lee Campbell is a lecturer at Wimbledon College of Arts, University of the Arts London and has been a practicing artist since 2000. He has been in numerous exhibitions and events internationally. He trained in Fine Art at the Slade School of Fine Art, University College London in 2005 and received his doctorate in 2016. He has recently performed at LGBT-centred online poetry events including INCITE!, London Queer Writers. His recent films have been selected for many international queer film festivals including Queerbee LGBT Film Festival, The Gilbert Baker Film Festival, Kansas 2020, HOMOGRAPHY, Brussels and STATES OF DESIRE: Tom of Finland in the Queer Imagination, Casa de Duende, Philadelphia, USA. He has been selected for WICKED QUEER 2021 in Boston, USA, one of the oldest and largest LGBT film festivals in the world and will screen one of his recent films at QUEER LIFE, EdgeZones gallery in Miami in May 2021. Recently interviewed by Hamish Downie for TWO GAY GEEKS. Forthcoming performances include Cruising Dystopia curated by Nouvelle Organon, Berlin.

Sample 1 'CLEVER AT SEEING WITHOUT BEING SEEN'

For visual poem version, see: https://filmfreeway.com/CLEVERATSEEINGWITHOUTBEINGSEENVideopoembyLeeCampbell2021 For live Zoom performance version, see: https://filmfreeway.com/CLEVERATSEEINGWITHOUTBEINGSEEN2021597 ---- Discover the same other whilst under the cover Creeping seeping peeping covert operations my teenage fascinations awkward altercations with non queer populations Sensations that taught me if ever they caught me side cautiously err deliberately blur words that infer derogatory slur I got very clever very clever at seeing without being seen Chelsea v Arsenal Dad watched the match I watched the players Dad remembers the midfielder’s tackle I remember the midfielder’s tackle Dad remembers the midfielder being shown the red card I remember the midfielder’s red jockstrap showing Dad remembers listening to hear who will next play again Chelsea I remember listening to imagine the midfielder That time in the Nineties when the only way I could see men in their underwear was in vintage fashion magazines from the Seventies Creeping downstairs whilst parents asleep to watch Television X just to see a man naked Smuggling copies of Gay Times into my room just to see guys like me A young Rupert Everett, full frontal, late night BBC2, black and white TV undiluted the beauty of his manhood Gay kissing scenes on TV. Dad tried to hide his discomfort and sometimes not Growing up as a teen Smash Hits magazine Spent longer looking at George Michael then learning the words of his songs My eyes on his chest, what’s under those thongs George still looked gorge singing slow, dark and moody Jesus to a Child, such a sad song that he sung But I’ll never forget Mr Michael all wet In the video for Fast Love, all my Christmases come His album called Older helped me through tough times Me finding comfort in the beauty of what he wrote in its lines Whilst I loved George and his chest back in late ‘87 This album taught me gays don’t just live and die Heaven We are often perceived as fake, camp, G-A-Y Yet this album was heartfelt and brought tears to my eye Brighton, my first gay pub Queens Arms George Street Heart a flutter legs like mush street was George my teenage crush Here’s where I learnt Bigger the fish, bigger the tackle Discover the same other whilst under the cover ’94. Me a boy no more Needed to see men like me Bunk off school to where was cool Shaved my hair to fit in where disco beats fill London streets Mix-tape boy So much joy amongst Gays like me who gaze and see cheeky cheeky very cheeky See Me See Lee Invisible queer seeing and looking imagineer here Lookin' teen magazine look beyond fear see and be seen Discover the same other whilst under the cover the brilliance of being through my resilience of seeing

For visual poem version, see: https://filmfreeway.com/WRONGKINGOFFATTHESNAKEINSIDE2021VideopoembyLeeCampbell For a live Zoom performance of this poem (full-length version), see: https://filmfreeway.com/WRONGKINDOFFAT-LIVEZOOMPERFORMANCEVERSION2021 ---- Queer is a disruption. We are the disruptors Young queer people. We're space architects Imagineers. Creating spaces that destroy our fears We survive in spaces where we thrive and our beauty comes alive Yet these spaces we create, we animate by constant self-policing Say the right thing. Body image Early noughties in my early twenties Kings Arms Soho. I discovered bears and cubs don’t just live in the forest I could feel the words in the stare of this most uptight bear ‘You could do with losing a few’ but the only thing I was losing was my mind This excuse for a bloke cracked joke after joke ‘Blue eyed boy Lee, I love your dark hairy legs Shame the rest of your frame is lard pie from Greggs Be more like me, on spinach and eggs You can’t be a cub, you’re far too too old; Put those legs out on show, if you want to get sold Wear shorts all year long, it’s not too cold’ I’m getting quite tripped on these bodies all ripped Imagine mine stripped and everything flipped Mr Spinach and Eggs, stick your rules and regs in the hole at the backof the top of my legs Smash the fads Rip the mags

Clever at Seeing Without Being Seen
( 0 comments ) 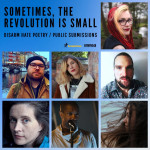 Sometimes, The Revolution is Small
( 0 comments )