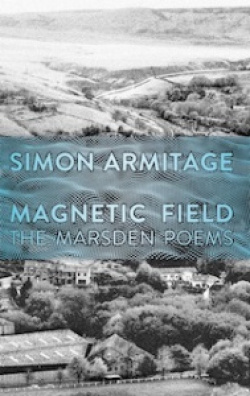 The poet laureate Simon Armitage is next month publishing a new collection of poems focused on Marsden in West Yorkshire – the Pennine village where he grew up. Magnetic Field brings together Armitage’s Marsden poems, from his first pamphlet to new work from a forthcoming collection. According to his publishers Faber, it offers a perspective on a locality he describes as a genuinely unique region forming “a frontier territory between many different worlds”. Growing up in Marsden, Armitage has always associated his early poetic experiences with the night-time view from his bedroom window, those “private, moonstruck observations” and the clockwork comings and goings in the village providing rich subject matter for his first poems. “Decades on, that window continues to operate as both framework and focal point for the writing, the vastness of the surrounding moors always at his shoulder and forming a constant psychological backdrop, no matter how much time has elapsed and how distant those experiences.”

In a discussion at the Winchester poetry festival in 2016, the former Oxford professor of poetry referred to the moors around Marsden as “my playground as a kid”, and a quarry where he would “go and misbehave …. I’ve written about that landscape so often". At the festival he was talking about the 47-mile Stanza Stones Trail, in which six poems by Armitage were carved into rocks by letter carver Pip Hall between Marsden and Ilkley, home of the literature festival where the idea was born, along the South Pennines watershed.

In the book Stanza Stones, published by Enitharmon, Armitage adds that he has been asked if he has a favourite stone of his own, and admits: “Having a poem carved not just in the village where I was born but into the side of Pule Hill, a hill which loomed large over the village of Marsden and exerted such a powerful gravity over me as a child is an extraordinary privilege.”

Marsden is an important location for Write Out Loud, too. It’s the home of our international poetry organisation, venue for the annual Write Out Loud poetry jam, during Marsden jazz festival, and also the home of Marsden the Poetry Village, which builds on Marsden’s poetic heritage, and aims to engage local people, especially children, in poetry. It has installed poetry books in local cafes and pubs.

Magnetic Field will be published by Faber on 15 March. Meanwhile the poet laureate, who has appeared in bands in the past, has also formed a new group called LYR (Land Yacht Regatta), and is releasing a debut album called Call in the Crash Team, in which Armitage’s words are set to music by Richard Walters and Patrick Pearson. You can see a video of their first single Never Good With Horses here. LYR will be appearing at Monday, 9 March at Brudenell Social Club, Leeds, and on Tuesday 10 March at Hoxton Hall, London.

Background: 'I feel it's time to give something back' - Simon Armitage is the new poet laureate

◄ Sale Write Out Loud at the Waterside tonight