'I feel it's time to give something back': Simon Armitage is the new poet laureate 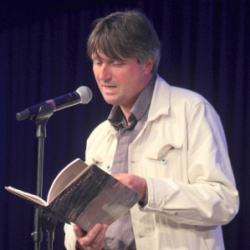 There is a sense of celebration at Write Out Loud with the news that Simon Armitage, who grew up in the West Yorkshire Pennine village of Marsden, has been appointed as the new poet laureate. Write Out Loud’s national base is at Marsden. The venue for its annual poetry jam at Marsden jazz festival, The Railway pub, was one of the young Armitage’s watering holes as he was growing up. And although he no longer lives there, his parents still do.

Armitage, who has just ended his term as Oxford professor of poetry – a post regarded as number two to that of poet laureate - received a phone call from Theresa May offering him the chance to succeed Carol Ann Duffy on Thursday. He told the Guardian that his parents cried when he told them the news. “They just burst into tears. I got a text from my dad later saying ‘We’ve stopped crying now.’ He’s very witty, though, my dad and he added, ‘If your grandad had been alive today, this would have killed him.’ ”

Simon Armitage’s connections with the Marsden area include the 47-mile Stanza Stones trail, in which six of his poems were carved into rocks between Marsden and Ilkley. Two years ago he said that the moors above Marsden were “my playground as a kid …  I’ve written about that landscape so often, there was a sense of me giving something back - whether it wanted it or not.”

In the book Stanza Stones, published by Enitharmon, Armitage added: “Having a poem carved not just in the village where I was born but into the side of Pule Hill, a hill which loomed large over the village of Marsden and exerted such a powerful gravity over me as a child is an extraordinary privilege.”

We at Write Out Loud have been quietly tipping him for the post for a while – as well we might. In 2015 Write Out Loud’s editor-in-chief, Julian Jordon, who lives in Marsden, saw Simon Armitage read in Washington DC, and wrote: “Having earlier generously endorsed Homer, Armitage felt it only proper to give Shakespeare the thumbs-up too, though was quick to deny any suggestion that he might consider himself in the same category as the bard. Perhaps not, but with his gathering national treasure status, one wonders how long it might be before he gets his hands on the laureate’s sack of sherry.  If this audience had a vote, it would be soon.”

Armitage, who is also the most recent winner of the Queen’s Gold Medal for Poetry, told the Guardian that he had had no hesitation about taking on the role of poet laureate. “It’s a big commitment, but if you’d asked me 30 years ago what I want to aim for, this might have been on the list,” he said. “And I feel I’ve been writing the kind of public-facing, public-occasion poetry that this role will require for quite a long time now.”

He hopes to use the position to “act in an ambassadorial way, as a kind of negotiator between what inevitably is something of a specialist art form, and the people who want to read it and respond on occasions with poetry”.

He will also use his stipend to set up “something in the field of climate change” – either a prize or an event. “It just seems to me that it’s the obligation of all of us and every art form to be responding to this issue,” he said. “It shades into all our politics, so I want to find a way of recording and encouraging poetry’s response to that situation.”

His translation of the Middle English classic poem Sir Gawain and the Green Knight was published in 2007 and has sold over 100,000 copies worldwide. The Death of King Arthur was shortlisted for the 2012 TS Eliot prize. Armitage's translation of the medieval poem Pearl was published in 2016 and won the 2017 PEN America Award for Poetry in Translation. His 2012 non-fiction book Walking Home, an account of his poetry-reading journey along the Pennine Way, was shortlisted for the 2012 Portico prize. The follow-up publication, Walking Away, told of walking the South-West coastal path.

Last year he wrote that the laureateship "should be awarded to a poet of true recognition, a poet admired by both their fellow poets and by the public, a poet who is both expert and enthusiast, and a poet who is an accomplished practitioner of the art as well as its champion and ambassador. No one else will do.

"It should be a poet who listens more than they talk, who reads more than they write, who thinks more of other poets’ work than they do of their own, and who knows and cares deeply about the poets of the past, because there are more of them than us and they are better. If you put the laurel crown on your head and you haven’t read the whole of Beowulf or the Iliad, or don’t know who wrote Lycidas, or can’t recite a poem by Sappho or Emily Dickinson, or can’t name a poem by Derek Walcott, then you are not worthy of the role. Prepare to be embarrassed at your first interview. The great majority of the best poetry ever written is freely available so not to have to read it – even just to disagree with it – is inexcusable.

"The laureateship requires experience and dignity. We’re not looking to appoint the mayor of Toytown or a mascot for our everyday aspirations. Or someone who has published four books, sits on five committees, has judged six prizes and is a nice person, or someone who is a shop-steward for contemporary values first and a poet second (or third)."

Armitage told the Guardian that he hoped he would have time to continue to write his own poetry, but admitted it was “an unknown”.

“I’ve done quite a lot of work already, so it’s not that I want to retire, [but] I feel as if it’s time to give something back,” he said. “I’ve done well through poetry, it’s served me well and I think I’ve served it well, and I think I can encourage other people now setting out on a similar adventure.”

Julian Jordon said on Friday, on behalf of Write Out Loud: “We are delighted that such a popular and accessible poet has stated his intention to act as ambassador for poetry. We feel this can only help with the work we are doing to bring more people to poetry and poetry to more people, including via our Marsden the Poetry Village project which has seen Marsden as the focus for an array of exciting and innovative experiments including poems on posters in shop windows, the village’s pub and cafés having a shelf of poetry books for reading over a pint or a coffee, and engaging the local children in poetry workshops and performances.”

Julian pointed out that Simon Armitage was still very supportive of his home village, regularly putting on readings in support of the Friends of Marsden Library. And in a footnote, he added: “Simon Armitage might have stormed the bastions of English poetry, but he’s still known in Marsden as Peter’s lad.” Armitage senior has been awarded honours too - an MBE for services to amateur theatre.

Deadline nears for Marsden the Poetry Village competition on 'Together' theme ►

It is interesting to watch the progress at the top. Clive James appears to be out of the running for the Oxford seat, respects due to Imtiaz Dharker for backing off from an onerous office, putting "poems first", Alice Oswald should be on the shortlist for Oxford and congratulations, of course, to Simon Armitage on his new post. If our Stu Buck can lay off Philip at their next run in, I can see him ascending to high office: who knows? Definitely one to watch.

I met Armitage in Silves once he was teaching poetry

I like the man; I like the poetry. Armitage comes every year to read at Grasmere. His unassuming demeanour and slightly deadpan delivery are not to some people's tastes, but personally I find it compelling when listening to his words in 'performance'. Agree with Graham's points about the development of the role and visibility ( I believe he will be a good PL ) but not sure how it will be achieved as far as a wider audience is concerned.

I don't think there can be many who would disagree with this appointment. Armitage is well known and respected but he will face the same challenges as all poets do and that is to make the medium more well known.

It is also good to see that the PL role is moving away from merely being a recorder of State and Royal shenanigans into a more widespread educational role.

He will need to become visible!

As the football chant might have it, "Simon Armitage ... he's one of our own!"