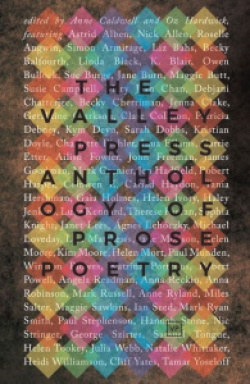 Despite what it says on the back cover, prose poetry is hardly at the cutting edge of contemporary writing. As the editors point out in their helpful introduction, it has a history that goes back to the mid-19th century and that is just in the West. In the East, its origins go back even further. Nonetheless, it is a fact that prose poetry, which has been well established in the US for decades, is now enjoying something of a renaissance in the United Kingdom.

Put simply, prose poetry may be defined as a piece of imaginative poetic writing in prose. The Poetry Foundation adds a little bit more detail by stating that it is “a prose composition that, while not broken into verse lines, demonstrates other traits such as symbols, metaphors, and other figures of speech common to poetry”. Some critics have given it a hard ride. To them, a prose poem is neither prose nor poetry but a halfway house that resists a definition of its own or, worse still, a home for poetry that would otherwise have read like chopped-up prose. TS Eliot was one of its fiercest critics. The editors fight shy of offering up a definition themselves, preferring the genre to speak for itself within the pages of this anthology.

The book sets out to showcase the variety of prose poetry being produced by contemporary writers born in – or working in - Great Britain and Northern Ireland. A good geographic spread has been achieved which stretches from Shetland to the Isle of Wight, and from Northern Ireland to East Anglia. It is interesting to note that, as far as gender is concerned, the representation of women to men is almost four to one. In addition to a few established voices, the anthology contains work by many new and emerging writers. Biographies of all the contributors are included at the end.

My concern with this anthology is that a few of the contributions read like extracts from larger works and many are too fragmentary to form a cohesive whole. All this goes to prove that prose poetry has to be carried off extremely well in order for it to be convincing on the page. Put bluntly, the poet has to work hard at his or her craft to justify writing in this genre. Sadly, for me, many of the poems were inaccessible which made it difficult for me to engage with this collection.

Of the 74 prose poems, Oz Hardwick’s ‘Solo’, Helen Moore’s ‘Black House, Great Berneray, Western Isles,’ Helen Tookey’s ‘Halb Null’, Jen Hadfield’s ‘Snuskit’ and Robert Harper’s rectangle poem ‘Carpenter’ held my attention. Despite the gimmickry of joined up words, I also enjoyed Maggie Butt’s contribution ‘Fruit’. Ecopoet Helen Moore’s contribution stood out for me insofar as it exhibited all the hallmarks of what a good prose poem should be like and its descriptive powers made for a very satisfying read. Helen Tookey’s contribution was notable for its conveyance of an air of mystery as well as for its ability to make the reader feel involved in the storyline.

It occurred to me to ask the time. She said Halb null. Half an hour to zero. How did it get so late? We had done nothing, only dallied in the café in the square, eating bread and artichokes, using up time to no purpose, and yet with a long journey to make. Halb null, and we had not even set out!

There were road blocks, long queues of traffic out of the city. At a standstill alongside a wide flat field, we watched circus performers rehearsing, tossing fire-sticks to each other in complicated patterns and interweavings. Sometimes they missed their catches, laughed as the fire-sticks fell harmlessly at their feet. It was late and they were only rehearsing, there was no sense of urgency or concern among them. But for us, time had slipped through our fingers, it seemed that we might never get back.