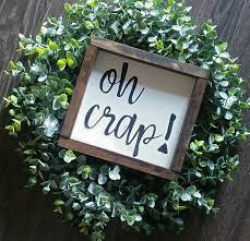 (true story in my town)

The staffers were all gathered

Round each other, seating

When suddenly they heard above

A sound, a sudden creaking

Very soon they all began

To look up, and start mumbling

When the creaking sound above them

Turned to quite loud rumbling

Above them gave away

And out from pipe above them

A not-nice thing did spray

As reader of my paper

When I read of this thing

My eyes popped in amazement

What this burst pipe did bring

The staffers they were more surprised

Than me at what came out

A flood of faecal matter

Some said “Shit!” (some shout)

It seems the plumb contractor

Did bang on the wrong pipe

Which split this faecal carrier

All full, and over-ripe

The staffers fled in terror

(Would you not do the same?)

(Through door in which they came)

Staffers had to shower

Not a nice experience

Not a happy bunch

Management provided free hot showers and bubble baths, fresh laundered clothes, and sandwiches of prawns and other delicacies. The contractor was sacked and heard to mumble as he departed “Why can't they paint it brown and write on it in big letters SHIT PIPE?”......

This is shitty hilarious write.....hehehe!!

Those who had the shitty shower must have smelled of it days.....eeeeeks!!!

Such a terrible shitty tragedy!!!

Fact can be stranger than fiction on occasions! And shit happens
(as a saying I recall reminds us). It's just preferable to be above rather than beneath when it does. 😵