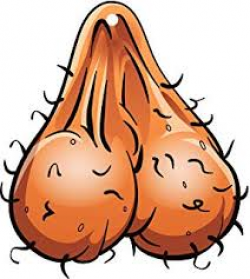 I’ve been reading Bill Bryson’s “The Body: A Guide for Occupants” recently and I’ve come to appreciate what a wonderful and complex construction of engineering, plumbing, dynamics and signalling the human body is and, at the same time, how little we understand of its workings.

Consider, for example, that you are composed of billions of atoms, each and every one of them completely inert and lifeless, yet they combine to make you you.  Just how, exactly?

But it set me to thinking about how I’d reconfigure the human form if we had to start again.  Now, forgive me if I seem a little vain in trying to improve on Nature or God or Evolution or whatever, but it seems to me there are one or two design faults which could be engineered out.

Take bollocks, for example.  They swing around outside the confines of the rest of me, vulnerable to the slightest tap resulting in nauseous and excruciating pain, not to mention risking their contribution to species’ sole imperative – procreation.

Don’t get me wrong, I understand why.  The theory is that sperm enjoy the coolness of dangling in a bag in the breeze rather than overheating indoors.  But we don’t build cars with the engine outside; rather we design a cooling system under the bonnet.  And I think if Henry Ford had been around on the sixth day he’s have respectfully suggested something similar.  And probably side lights too.

And gills.  Why have we evolved these away?  Surely the capacity to breathe under water should have come as standard rather than requiring the invention of SCUBA?  It’s as though Nature thought, “I’ll give these clever bastards another way to die called drowning”.  And wings for that matter.

Yes, I’m quietly confident the father-in-law and me could have come up with something better.

◄ "BLAME IT ON THE BOOGIE"

I bet that took the dull ache away, MC.

JC - he did say sorry! It was a long time ago now and I hope he is
that much wiser as well as older.

How was the miscreant’s knee, MC? I’ve heard about police brutality whereby they batter their balls against innocent angels’ knees and feet.

I can't speak for childbirth but having sustained a ruptured testicle at the knee ( I won't use the expression "hand" in this context!) of a detained miscreant, it's odd but the adrenaline must have been in
full kick-in (oops) mode because it was only later that the discomfort
became apparent - along with the need to have blood drawn out of
the potato-sized swelling sustained as a result. I think the medico
suggested that I lie back and think of England as he wielded a
rather large syringe that quickly dropped out of my sight below
my pelvis. Not an experience I would want to repeat for all
sorts of reasons. That said, I can't speak for masochists either!! 😆

Indeed not, Brian. You have solved the conundrum of which is the more painful,

Women say that childbirth is incredibly painful, but then can't wait to have a second child. It can't be that painful surely? My logic is this...take blokes - we've all had a knock in the bollocks and know how it feels...do you ever hear a bloke say "I'd love another kick in the bollocks!"

You need re-configuring.. You're molecules are all out of kilter....

That's the way the good Lord built me Eth....

Don't think he consulted the plans when you were under construction....

Maybe he was cavoting with the angels Eth?.....