"ALL LIES AND JEST" 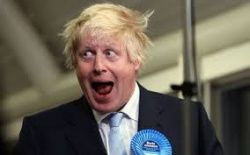 (A repost from earlier this year.  But worth repetition.  I'll just leave it hanging here for election week)

"I am Boris Johnson; now my story shall be told;

I have plundered an existence, positioning myself to my advantage";

“All lies and jest”;

Still you pricks hear what you want to hear and disregard the rest,

Denying any part in Britain’s mess.

And he’s made his reputation

On bumbling and endearing daft tomfoolery;

But he knew what he was doing as he played you all for fools,

So it’s you as well as him I ridicule.

“I was once a European advocating we must stay

Then I saw that my advancement

Was better served by leaving from the Union;

Would enhance the chance of victory for us.

Lie lie lie; our campaign was nothing more than lie on lie.

And, of course, the Turks were coming and we said the new trade deals

Were the easiest in history

But look around – you’ll see that still we’ve got none;

But sense among Leave voters was so rare!

Then the issue of the border across Ireland raised its head

No, I never saw it coming

But fluster on and on about technology;

And the Labour Party all in disarray.

I await my coronation as their leader and PM

Achieved without a single thought or policy inside my noddle,

Yes, you pricks heard what you want to hear

Despite the glaring proof;

◄ COS HE'S A LIAR (BUT YOU'RE NOT BOTHERED THAT HE LIES