HE'LL HAVE TO GO 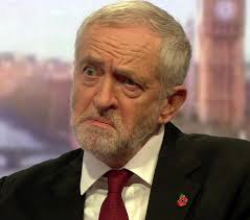 Move your sweet lips closer to the microphone

You should concede you have indeed made a poor show

Admit defeat; (best not to bleat)

You’ll have to go.

We were presented with a choice of the Hard Left

So let Boris get away with daylight theft

The Right now cackle at his debacle; they jibe and crow

He’ll have to go.

How could we spurn those many warnings that your feet

Would never tread the shag-pile rug of Downing Street?

So take with you McDonnell too-

He’ll have to go.

Won’t you say those words we long to hear

That it’s time for you to scram?

It’s best that you should disappear

To make your damson jam.

Tell us that you aren’t the leader that we seek

You lacked the skills, charisma too and you were weak

Despite this rout you’re without doubt an Honest Joe

◄ "ALL LIES AND JEST"

Thanks, Po and Don.
(What have I started.)

Did she pull the power out?
Had she had enough?
'I will hav... click' (goodbye)
Sorry Po, stiff tuff

no time to write a rhyme
Hang on a bit, til I get time.

Friday evening 23:34 and he's still there. Whatever's up with him FFS?

If only someone had warned us he was unelectable, Brian!