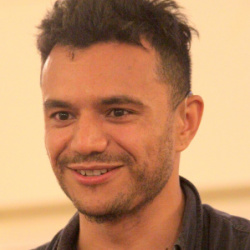 The multi-award winning poet Raymond Antrobus has won the £5,000 Sunday Times/University of Warwick Young Writer of the Year award for his debut collection The Perseverance.

The Perseverance has already won the Ted Hughes prize. The announcement of the award, open to British and Irish writers aged under 35,was made at a ceremony at the London Library in central London on Thursday evening. The collection explores the poet’s diagnosis with deafness as a child, his mixed heritage experience, masculinity, and his father’s alcoholism and later decline into dementia.

Antrobus told The Bookseller after winning the award that his journey to publication had not been easy: “No one wanted to publish the book and so I ended up on a small press but I’m so glad I did because I got to work with Penned in the Margins. Tom Chivers [editor], who has been so supportive since he read the first version of the manuscript, he loved it. This was poems and writing I had been living with for so long and I didn’t know, I couldn’t tell if it was any good so when I finally got encouragement from him in ‘I want to publish this’. And it was interesting that I’d written two books and he cut it in half – I thought I’d been writing one book but he cut it in half and said this is the book [which became The Perseverance].”

He said that Chivers had to prevent him from tinkering any more with the manuscript once it was finished. Antrobus said: “It was great to have someone to tell me when to stop, otherwise I would have just carried on writing and writing and rewriting … he had to physically take the manuscript off me and block my email so I’d stop sending emails … poets, we need that – we need to be told when to stop.”

One of the judges, poet Kate Clanchy said: “Raymond Antrobus’ The Perseverance draws together the worlds of performance and page poetry and speaks for his Jamaican British heritage and his d/Deaf communities in a way that is completely contemporary; but it was the humanity of the book, its tempered kindness, and its commitment not just to recognising difference but to the difficult act of forgiveness that made us confident we had found a winner for this extraordinary year.”

Antrobus was born in Hackney to an English mother and Jamaican father who lived separately. As a child he was wrongly thought to have learning difficulties until, at the age of six, his deafness was discovered.

The Bookseller said that Antrobus is one of the first recipients of an MA in spoken word education from Goldsmiths, University of London and has had multiple residencies in deaf and hearing schools around London. He was the first poet to win the £30,000 Rathbones Folio Prize in May and used some of the prize money to mentor a group of deaf children at his old school, Blanche Nevile School for Deaf Children in north London, and for groups of students from both Blanche Nevile and Oak Lodge Deaf School in Wandsworth, to go on poetry, theatre and literature trips throughout the year.