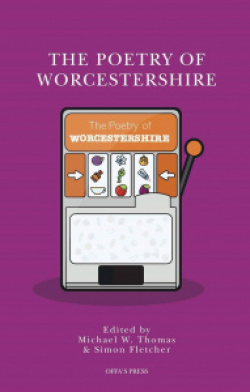 It is the county of Woodbine Willie, Basil d’Oliveira, apples, pears and plums, a certain kind of sauce, floods, Elgar, and steam trains. Some poets appear a little diffident at first about its appeal. Kathy Gee tells the stranger in ‘Somewhere in the Middle’:

From anywhere else we’re nowhere,

a stretch of land between the rest ,

… Don’t be deceived, this centre spot,

which strangers cannot map or name,

is where the country pivots. Stop.

Paul Francis pays tribute to two Worcestershire heroes: the quiet dignity of Basil d’Oliveira, the cricketer who found himself in the middle of a controversy that forced England’s Test selectors to take a belated stand against South African apartheid (‘In the Middle’); and Woodbine Willie, the first world war chaplain and poet, in ‘Memorial’.

Raine Geoghegan contributes a lyrical account of ‘Apple Picking in the Vale of Evesham’, in a nod to the county’s wealth of orchards, and Neil Leadbeater weighs in, too, with ‘Pershore Plums’ and ‘Winter-pruning the Pear Trees’. Liz Parkes tells the story of Worcestershire’s ‘Lee and Perrins Sauce’, and its ingredients:

To a vat of malt vinegar, a bucket of barley

Perrins garlic, a handful of salt.

An aristocrat had demanded something a bit spicy to remind him of Bengal: “… they bottled this alchemy / familiar to Bloody Mary, Devilled Eggs /smart sauce on liners, mighty queens / grave goods on the Titanic’s muddied bed.”

‘Worcester Floods’ by Jenna Plewes records the fact that the Severn spilling its banks is a regular occurrence in places like Worcester, Bewdley, and many other locations in the county. It oftens turns the racecourse into a lake. John Sewell’s marvellous poem, ‘Elgar in Bronze, Broadheath’, examines how the English composer was inspired by the Malvern hills and environs:

Such a hopeful tone –

a long sustain on the oboe perhaps,

emotive as an a cappella voice

whose plea we take to heart, though not one word

is spoken something decks us nonetheless –

whatever love we’ve known, have yet to know,

comes glowing through that single note.

There is also another poem by Sewell in the anthology, about steam trains. Although I have no particular connection with Worcestershire, I did once read poetry with a number of other poets on the concourse of the Severn Valley Railway’s splendid Kidderminster station, to mainly bemused onlookers who were there to catch the next train. And so John Sewell’s ‘Waving by the Severn Railway’ – “That boiler-heat simmer of cylinder, valves, drain / cocks, injectors, link rods  and bearings all well greased” -  which is a tribute to one of the country’s most scenic heritage lines strikes a chord with this railway enthusiast.

AE Housman’s elegy to ‘Bredon Hill’ is also included. From Wyre Forest to Droitwich Brine Baths, and from Stourport to Worcester’s Old Rectifying House, there are enough poems of quality in this rich anthology to reveal a thriving poetry community, and to convince the outsider that here is a county that inspires. Worcestershire is no longer a well-kept secret. This book could prove a quirky and well-received stocking-filler at Christmas.