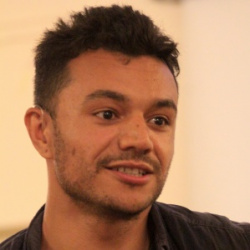 The British-Jamaican spoken word poet Raymond Antrobus, who was born deaf, has won the £5,000 Ted Hughes award for innovative poetry for his collection The Perseverance, published by Penned in the Margins. One of the award’s judges, Clare Shaw, called his book, which includes elegies for the poet’s father, “universally relevant”, while fellow poet Linton Kwesi Johnson described it as “the most engaging collection of poems we have read in a long time”.

Antrobus, who was born and bred in east London, co-edited Magma poetry magazine’s Deaf Issue in 2017. Last year he was awarded the Geoffrey Dearmer prize for his poem 'Sound Machine'. He has performed at festivals such as Glastonbury and Latitude, and is a founding member of the Chill Pill poetry night and Keats House Poets Forum, and a board member at the Poetry School.

'Maybe the ghostly face in the window staring back at him' ►