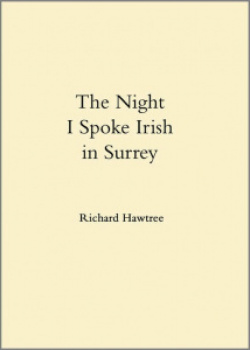 Perhaps you need to be as well read as Richard Hawtree to truly appreciate the poetry in his rich, debut pamphlet collection. On the other hand, maybe it doesn’t matter. Most of the poems are inspired by, or versions of, something else, including a 13th century Westminster Abbey pavement, the Old Irish Instructions of King Cormac, and an early mediaeval Welsh lullaby.

The opening poem ‘April Leaps’ is full of joy at the onset of spring:

rattle and bhodran are swept

from quayside to castle

and back with a clack

Other references include Catullus, the burning of Sappho’s poems, and a poem simply titled ‘Stray Versicles’ that includes a section about an Irish psalter raised from a bog. ‘Pastourelle’ is after Kit Marlowe, blending the old and up to date:

Come live with me, beloved. Let us dwell

near pyramids of fractals no Egyptian

could possibly unscramble. Let us spell

out every pixel of our high res passion

within the stanzas of this pastourelle

There is a similar mix, of Renaissance and contemporary, in ‘Digital Detox’:

And I’m minded to sing, and seal love letters

to the timbre of a 3D-printed lute.

I’ll head to the Gironde to waste all taste

of algorithms from my clouded feet.

These are not poems of mere arcane whimsy. ‘Hatchment’ acknowledges the “subtle obsolescence” of such words as the title of the poem – a word to do with funerals and heraldry - and references Larkin in its appreciation of the historic objects to be found in churches. It has a satisfying structure, and the poem’s mood is one of acceptance, rather than melancholy. The poem ‘Collider’, shaped like a series of steps, plays with the word hadron, and its similarities to Hades.

Hawtree’s Irish heritage is never far from the surface. ‘Independence’ is set in a post-colonial Celtic garden, with Derek Mahon’s shed containing forgotten fungi just out of sight, and no longer any “snipers in the rhododendron beds”:

By midnight there was little need for caution

in downing alcohol. Just two of us

untended in a Cork garden,

kowtowing to the postcolonial ferns.

The collection concludes with the title poem, ‘The Night I Spoke Irish in Surrey’, a madcap infiltration of the spirit of Ireland with a staid English home county, in which the poet succeeds in making that county sound quite exotic as he goes on a kind of linguistic and topographical bender, invoking such Surrey sights as  Virginia Water, the Mole Valley, the Hog’s Back, and Newlands Corner, before waking the morning after: “Next day we straggled out / over Waterloo Bridge - / the English jangling / in our sorry heads. “

The front cover of this pamphlet may be unadorned but there are gems within. This is another significant collection issued by the industrious and expanding Surrey-based publishers Dempsey & Windle. Never mind the fact that the high-spirited Richard Hawtree appears to be formidably erudite in his subject matter. You can just enjoy the exuberance of his verse, without knowing all the details and references, in this eclectic mix of subjects and styles, including haiku. And after all, there’s always Google.

◄ Never mind the election: it's Write out Loud Wigan at the Old Courts on Thursday

It's gratifying to read about Richard de Hawtree as I like to call him as he is a genuine scholarly and witty eccentric with that special touch, whose work I am often hearing from my position as part of the Dempsey and Windle entourage, and what a pleasure it is, with his languid and witty delivery always in evidence at readings. Anyone other than the truly learned will have difficulty keeping up with his arcane knowledge applied for one and all, but his enjoyment of his subjects are nevertheless infectious.
Lovely resume by the way Greg.