Notes from a small island (2) 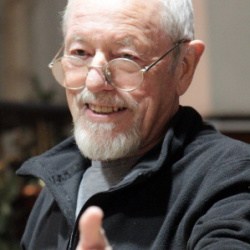 We’ve been going to the Isle of Skye for 20-odd years, renting a bungalow from Norman and Effie Macpherson in the crofting valley of Achnacloich on the Sleat peninsula. Norman was a shepherd all his working life, on Ben Lomond, Ben Nevis, and finally, till his death four years ago, back on his home island. Every now and then I’d try to write about them, but always felt conscious of what I imagined would be their wry, dry take on the whole sorry impertinent business. What did I know? Even so, when I put my first pamphlet together I wanted them in: a seven-poem sequence titled ‘Crofters’.

If anyone else had given me permission for that, it was Norman MacCaig, who I read and re-read, trying to nail down just how he did it; that apparently simple thing of writing about the people and hills of Assynt that he loved and knew better than I’d ever know Skye, or Effie and Norman. Anyway, that’s the thing I was after. The way Norman would hide behind the barn to smoke, the quiet pauses of Effie’s speech. Here’s Effie

eats her slice of cake with care,

pinches up its crumbs,

always leaves her boots outside.

She’ll not have cheese with fruit cake;

she’s too polite to say so,

but knows it isn’t right.

She misses him smoking behind the barn

as if he thought she wouldn’t know.

with two young ones, playing

where the burn runs into the sea.

That dog he drove all the way

to Tyndrum to buy is daft; and, yes,

it takes no notice. It stops and starts.

Och. Well. Thank  you for the cake.

One year, she came up to the house,

to make sure we’d not miss

the shimmer of smoke and silver

above the Cuillin, the whole sky

Norman had left Skye when he was 14; he went to be a shepherd on the Lomond range, and then became head shepherd on the Nevis range. In his early 50s he came back to Skye to manage the ClanDonal estates, and to run his own flock of about 400 sheep. He met and married Effie who was a fair bit younger than him. He died in his early 80s:

He’s laid up in the house:

and maybe sheep-dip’s to blame.

Effie kept up his flock (and still does), feeding the sheep that come running

ignore the black and white dog,

the woman in the pilled grey fleece,

her hair that breezes cannot ruffle.

It was an expensive dog, that one. Norman went down to Tyndrum to buy it. A serious business, buying a working dog.

I still didn’t feel right about publishing the poems. In a diffuse sort of way, a way that says: well, they’re not going to see these poems. No one’s going to buy them, after all.  That sort of thing. And then I wrote some more, and sent some in for competitions. A poem called ‘Norman’ came second in a York literature festival competition. I wrote from memory and feeling. Some things I know are factually true and some as though they ought to be.

could birth a lamb in the lee of a dike,

smit a skittish ewe in a squall,

pin down a ram and not give a jot

for its yellow stare, the black slot of its sideways eye,

wear a two-year Herdwick like a scarf over three miles of bog,

make good a tumbled fence with a twist of twine,

strip out an axle on a Subaru,

haul a whole flock through and still tell a tale

over the clamouring misery of bleat.

He could walk all day in a pelt of rain and a sack for a coat.

To put down a runt or one with a goitre

or one with a sprain or a maggoty arse –

that was beyond him quite.

The days for the slaughterman’s truck

he was away over the moor.

He knew where the first primrose showed.

I knew all about the Subaru, but the Herdwick was there for the heft of the word. It would more likely have been one of the blackfaced sheep. I don’t know the proper name. A Cheviot? What I was after was the mix of Norman’s durability and the sentimental side he could show.

He once told me he knew a secret place in the woods beyond the headland. He’d take Effie there to show her the first primroses. They can’t be got at now, because of the deer fences. He was cross about them, because now there are no deer to keep down more competitive plants.

The man at the garage in Armadale told me that all the neighbours were pretty sure that years of exposure to organophosphates in the sheep dip played a part in his illness. That had to find a way in.

That’s Norman who I didn’t know all that well; but it’s the Norman I remember. I worried about whether Effie would recognise him. Or think me obtrusive. An incomer.

The business was finally settled for me when Liz Lochhead picked a poem as the winner of the 2014 Plough competition. It pivots on something Effie happened to say when I told her about an odd meeting in the rain down in Tarskavaig. This is it. 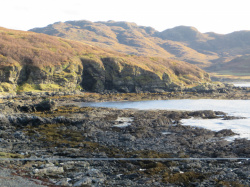 Washed up on a rucked-rug shoreline

look to the barns, and count the spades,

and what did they ask you for,

on the windscreen, brown as selkies.

For a light only, the bright ember,

blue smoke blown on the wind, the spit

of rain off the sea, and thanks we’re away

down the road and done with the day,

with turning stones, and bladderwrack,

browsing the cold shore for cockles,

What’s to be done with Tarskavaig tinkers

who come up out of the peat or the sea?

And when the light goes, where do they turn?

We’d had a laugh over that. Not ‘PC’ that ‘tinkers’. “But they’re tinkers just the same,” said Effie. And I cut her some cake. Well, it takes more than a slice of cake to say ‘thank you’ for putting someone out there in public, when you never said ‘please’ in the first place. I had sleepless nights over it all, then said the serenity prayer. The bit about asking for courage to change the things we can. I made a neat parcel of my three pamphlets, and wrote a letter that took me more redrafts than most poems, all explanation, mea culpa and apology, and posted it all off to Achnacloich on the Sleat peninsula of Skye.

Then I waited. And nothing happened. I thought maybe she’d gone to visit her cousin, or gone over to Ireland for a holiday, or … I thought over and over, what if she’s upset, or worse. I bit the bullet and telephoned. Oh, hello, she said. I was meaning to ring you…I feel guilty now, you know how things get put off, it’s been a terrible summer, och, the worst I remember, dreich days, and grass poor, we’re taking supplements up to sheep; yes I got your books. We liked them. Norman says I’ll be famous now. Och, no, of course I’m not cross.

For two days I walked on air, and this week, as she does each year, she’ll come over to the cottage for a slice of cake (no cheese, thank you), and all will be well. Whose lives are they anyway, when we write? I have no idea. But I know we’re responsible for them, and the truth of them. Whatever that is.

Postscript: Since I first wrote a version of this post, I’ve had two more pamphlets, a collection, and a jointly-authored collection published. The tinkers and Effie and Norman finally went properly public in 2016 when they appeared in my first collection, Much Possessed. And in more poems that may or may not be published one day. There’s a moral here. Stay with your instincts. Anyway, as a bonus track, here’s Norman in a mellow mood. And a photo of the loch where he saw the reflection of the white-tailed eagle 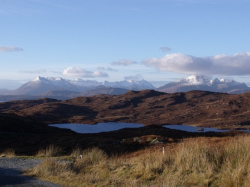 That would be the time I saw the white-tailed eagle,
the time Norman says Well, yes, I’ll take another,
the time he came up to the cottage, which is a thing
he rarely does; it would be Effie, usually,
who’d have a cup of tea, a slice of Dundee cake,
but Norman says cake’s not his thing, and coughs,
thoughtfully, because sheep dip will do that
over the years, it’ll get to the lungs, so then
we settle on the whisky; not a single malt –
the Isle of Skye that’s blended in the South,
in pawky Edinburgh, but like Angus
at the Post Office by the ferry always says:
it’s a wee bit smoky-peaty, and och it’s no
to everybody’s taste, but it turns out
it tastes just fine, which is how it comes to be
that Norman takes a generous third glass
and spreads himself a little and says
that last year, driving back from Armadale,
just where the road comes over the moor
above Loch Dughail, just before it twists
down the three miles through the birches,
just there, and was it June? Och, summer, anyway
and right there above the loch, and it was a day
so still, there was a white-tailed eagle, sailing
in off Slapin, and not a wingbeat to it now,
and there it was, and there it was reflected
in the loch, and you know, that was a lovely thing,
the eagle in the wind and on the water.

And I know that though I never saw the eagle
ride the wind to Rhum, I know I saw it then
with Norman, comfy in the armchair,
with that third glass of smoky-peaty
blended Isle of Skye.

The Big J vs The Big C: Janine Booth, Flapjack ►