The Big J vs The Big C: Janine Booth, Flapjack 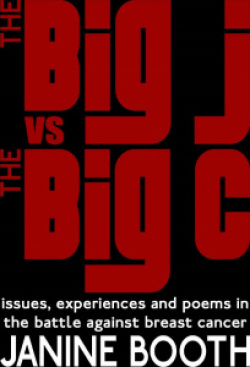 There is a sobering and rather worrying statistic that has emerged from Cancer Research UK since 2015, which is that one in two people will develop cancer at some point in their lives (published in the British Journal of Cancer. Of course, longer life spans account for much of this increase, but still – one in two. And as Janine Booth points out in her book, The Big J vs The Big C, cancer research is still in the hands of a charity, treatments remain pretty brutal and fairly primitive considering how long the research has been going on, and rather than being properly and fully funded by the government, it continues to rely on "coffee mornings, sponsored sky-dives, and funding from the private health industry".

Shocked yet? You will be, by the time you have finished this eye-opening collection of journal extracts, photos, poems, meticulous research and substantive politics which chart her battle against breast cancer.

Published by the ever-expanding Flapjack Press, and typeset in a sans-serif font to make it easier for dyslexic readers, the book provides a clear picture of every step of the journey, from what to look for during self-examination to ‘getting over it’.  Raising essential questions about how cancer research and treatment is organized, funded and managed, this book could quite easily be titled ‘Everything You Ever Wanted to Know About Breast Cancer (But Were Afraid to Ask)’.  Littered with daft boob jokes and ‘tumour humour’, comedic takes on various tests, treatments, and side effects, I would describe the heart of this collection as stoical, inspirational, as well as reassuring and very, very funny. It delves deep into the darker side of what it’s like to have cancer, a place most people don’t want to think about unless, or until, they or a loved one are diagnosed.

Given that worrying statistic I mentioned earlier, I believe this book should be on coffee tables and leaflet stands in every NHS waiting room across the country. I think anyone with a confirmed breast cancer diagnosis would be greatly assisted by it, not least because it doles out generous amounts of genuinely helpful information.  Did you know, for instance, that the second you have a confirmed cancer diagnosis, you are classed as ‘disabled’, and therefore entitled to free prescriptions? And that, regardless of the issue of disability, you qualify for free prescriptions for five years as a result of having cancer? No, neither did I. Or that you can request ‘reasonable adjustments’ from your employer - for instance, reduced hours for an agreed period - and that ‘failure to make reasonable adjustments’ is unlawful discrimination. She even goes so far as to offer a list of seven adjustments that you could ask for, and five forms of unlawful disability discrimination against workers who have cancer, in addition to information about employment tribunals, and urging readers to join a union. Union membership means that you have a much better chance of success, in that employers will know that the spotlight is on them so more likely to agree to what you need, plus you can take your union representative into any relevant meeting with your employer.

But what about the poems, you ask. These were written “as it happened”, and take the form of clever villanelles, haiku, and acrostic poems.  They cover ground such as ‘Tests on my Breasts’, her “beautiful disfigurement”, hot flushes, and the wry ‘Responses’:

I’m so sorry to hear that.

I don’t know what to say.

At least they caught it early.

I’m sure you’ll still be OK.

My sister had that. She ignored it and it spread

Until it was too late.

No sugar. And filter your water –

You’ll be fine, you’re a fighter –

Because Spitfires never get shot down,

It’s a great comeback to the often ill-thought-out responses to bad news. I’m surprised Manuka honey didn’t make the poem though – that’s dragged out at every opportunity by well-meaning though misguided sympathisers.

Oh come on, what’s the point of having an unpleasant side effect from an arduous treatment

for a killer disease if you can’t have a bit of harmless squirty enjoyment?

to making each trip to a medical appointment ‘worth it’, to use that time to explore places that you might not have bothered with previously, she makes the point that otherwise, the entire day becomes just about the appointment, treatment, and getting home. Visiting someplace different each time will put pleasure and knowledge acquisition into that otherwise stressful day, and makes it that little bit better and more bearable.

We have a theological analysis of why prayer can’t cure cancer, scathing discussion of the ‘commercially sensitive’ nature of the discount deals done between private pharmaceutical companies and NICE (The National Institute for Health and Care Excellence); truly staggering revelations about the funding and provision of cutting-edge cancer treatments that simply do not reach the most important person in all of this – the NHS cancer patient.

And while they talk, the cancer spreads again

You’ll get your pills when they’ve agreed a price

You’ll get your answer when they’ve rolled their dice

And dealt your hand out in their counting den

Nine months of talks to get the charge precise

Let’s hope that you can stay alive till then

You’ll get your pills when they’ve agreed a price

We also get to find out exactly why our medical records are not ‘all joined up’, a debacle which has pretty much successfully been brushed under the carpet by various governments, but which affects almost everyone with more than one dealing with our health and social care system.

Following surgery to reduce the chances of the cancer occurring elsewhere in her body (a side effect of one of the medications she takes), this produces its own side effects.  Indeed, this “cancer business never ends”.  In true Big J style though, she writes it out, and we are treated to a hilarious pastiche of a Donna Summer song, in the poem ‘Hot Flush’

Waitin’ for my temperature to fall

Tried about a thousand remedies lately

Want to bash my head on the wall

Gonna have a hot flush, baby, this evenin’

I don’t want a hot flush, baby, this evenin’

Further complications arise, and just when you thought it was over, it drags her back in to hospital with neuropathy in her right arm

It seemed that even when your cancer has gone, you never stop being a cancer patient.

In conclusion, although rare personal troughs exist here and there, you get an overall sense of strength and fierce determination to face this life-changing disease head on, to make the best of every situation, and draw as much humour and creativity from it as possible, whilst maintaining a righteous fury at the damage done to the NHS. I already admired Janine Booth for her poetic and performance skills, her integrity as a trade unionist and activist, her principles as a socialist-feminist and Marxist. Having read this account, I can add her honesty, humour, courage and generosity of spirit to that list.  Hand on heart, this is one of the best books I have read this year, and recalling that statistic I mentioned right at the beginning, I would urge everyone to buy a copy, for themselves, a friend, or a family member.   Let’s start talking about cancer, and stop hiding it away.

◄ Notes from a small island (2)

'One more hour to get the words right; one more chance for the heart in hiding' ►

Review » Passport to Here and There: Grace Nichols, Bloodaxe