Competition closes in 16 days, 3 hours. Get details and Enter.

THE PRAYERS WITHIN THE STONE 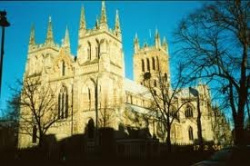 (Selby Abbey celebrates its 950th anniversary this year.  A tribute)

I know the Abbey well enough; I worked there for a while;

I’ve walked its length a thousand times – the nave, the quire, the aisles.

I know its features through and through; I’ve shown them to our guests;

Each visitor has favourites – the things they like the best.

Some come to click their selfies, and some to venerate.

Some photo the distorted arches when the tower sank,

Some trace the grooves of masons’ marks; some sit and offer thanks.

Some crane their necks towards the roof to view each ceiling boss,

Some light a candle for someone; some bow towards the cross.

They’ve seen the Jesse Window and, of course, the Leper Squint

It’s a shame to turn the lights on and to start the daily chores.

They come, of course, for services to hear the gospels’ texts

They worship or they celebrate or they pay their last respects.

Though I’ll not see it celebrate its first millennium.

They’re welcome, though, the lot of them (though less at five to four!)

That’s when I feel the weight of history in the great West Door.

I start to shut the Abbey down, physically, at least,

Though spiritually its beating heart doesn’t ever cease.

It’s then I sit and wonder, enjoying solitude,

God’s fading light for company and bathe in quietude.

Sometimes I pinch a biscuit, sometimes a mug of tea,

Sometimes I’m sitting on my own, sometimes it’s Him and me.

That’s when I swear I’ve heard them, when I was all alone

Chanting through the centuries – the prayers within the stone.

But centuries of worship are soaked within these walls.

Echo softly from the nave towards the sacred east.

Then prayers of intercession, or sometimes happenstance,

The harmonies of by-gone monks in sweet Gregorian chants.

At times I barely hear them, their murmur soft and low

Which drifts atop the silence for a while – and then they go.

Hearing this and seeing sights the public never sees.

So sipping on a coffee in the twilight on my own

I listen to the centuries of prayers within the stone.

◄ "ALL LIES AND JEST"

Yes indeed, Kev. The last performer was “interesting”. What was missing in quality was more than offset by the quantity.

And a brilliant rendition it was . Sorry I had to sneak out straight after, I don't believe I missed much. By all accounts this was meant to be the last spot of the night. We like to finish on a high, and save the best till last.

Thanks, MC. I am reluctant to market the Abbey. It is best kept a secret.
Thanks also to Martin and Kev (who had the "benefit" of my rendition at Well Spoken, Donny).

A pleasing personal reflection. Clearly, this a building that is far from
its Sel-by date ?

Thanks, Don.
And Devon and Lisa for the Likes.

So good John. My first visit to an English cathedral/abbey was when the choir was practising. It sent shivers up my spine. I know the feeling......