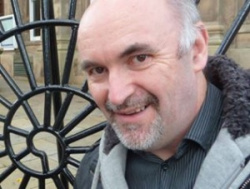 I knew Andrew.  But not well.

I’d not seen him for six or more years, since he’d moved away from the York area to deepest West Yorkshire.  But we kept in touch through Facebook.

Those who knew him will recall a character warm with wit and charm. He came from Essex, the son of a clergyman and wrote much about his childhood there.

He cared.  And I don’t mean that just in the sense that he cared about the injustices of life or for those in less fortunate circumstances than ours as some of us do.  But I mean his career had been in caring, largely old peoples’ homes, as I recall.  A rich vein of inspiration he tapped into for some of his stories.

His literary output was poetry and (and this is what I remember him for most) his short stories.  What characterized them is that they were about real people brought to life in his telling; always done with a cheeky warmth. Mostly at the Exhibition in York.

His final months were spent in critical illness which he confronted, publicly at least, with a stoical and quiet strength – almost a gallows humour so characteristic of him.

Several times he would chastise me (but gently) for some tasteless post I’d put on Facebook.  And I welcomed and treasure that,

ThanksMC. I’m sure he deserves a better accolade from those who knew him better. But in their absence I thought I’d step in.

Friendships are always to be valued and although these change
with the passing of time, they are no less valuable.
What we have is what we leave
When we depart and those who grieve
Remember - in his or her own way -
Of who we were back in our day. ?