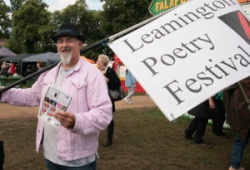 Festival director Mike Took is flying the flag for Leamington’s new poetry festival, which will take place from 5-7 July. The festival will see over 50 poets, most of whom are from the local area, cover everything from peace, reconciliation and contemporary beauty to politics and social realism.

The programme includes Edinburgh preview shows, adults-only Poetry in Your Pants and a headline set from Attila the Stockbroker, with the majority of events free to attend, including two open mc events. “One of our aims is to find new audiences and to show just how inclusive and accessible poetry is,” said Mike Took, who has been running Leamington’s popular Scriptstuff Poetry monthly event for two years. “We all know that anyone who wants to can write a poem, well now literally anyone can perform their work in public, too.”

Mike said: “We have stand-up comedy, old school punk, some of the fiercest feminism in the country and a huge cross-section of local people performing in public.” More details