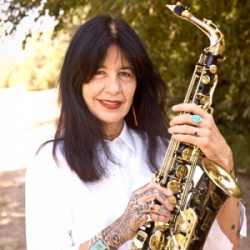 Joy Harjo has been named as the first Native American poet laureate by the US Library of Congress. Harjo, a member of the Muscogee Creek Nation, will take over from Tracy K Smith, who has held the position for two years, and follows in the footsteps of such names as Rita Dove, Louise Glück, and Billy Collins.

Harjo, who lives in Oklahoma, where she was born, said: “I’m still in a little bit of shock. This kind of award honours the place of Native people in this country, the place of Native people’s poetry.” Carla Hayden, the librarian of Congress, said Harjo’s work “powerfully connects us to the earth and the spiritual world with direct, inventive lyricism that helps us reimagine who we are”.

Her books include Conflict Resolution for Holy Beings (2015), Crazy Brave (2012), and How We Became Human: New and Selected Poems 1975–2002 (2004). She has played alto saxophone with the band Poetic Justice, made four music albums, edited literary journals, and written screenplays.

Harjo was born in Tulsa, Oklahoma in 1951, with the given name Joy Foster. Her father, was Muscogee Creek and her mother has mixed-race ancestry of Cherokee, French, and Irish. When Harjo enrolled at age 19 as a member of the Muscogee Creek Nation, she took her paternal grandmother's last name "Harjo".

The New York Times said she said she hoped “to remind people that poetry belongs to everyone” and that it can draw from a range of human and natural experiences, “sunrise, sunset, eating, enjoying company, births, death, all of it”.

She added: “Just as when I started writing poetry, we’re at a very crucial time in American history and in planetary history. Poetry is a way to bridge, to make bridges from one country to another, one person to another, one time to another.”