Competition closes in 17 days, 10 hours. Get details and Enter.

Listen up! Accent's on Yorkshire poets in dialect programme on t'radio 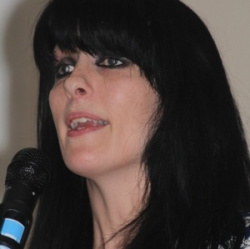 A radio series looking at dialect poetry in different parts of England visits Yorkshire on Sunday. Dr Katie Edwards, who found herself mocked in academic circles for her broad South Yorkshire accent, has made it her mission to celebrate her linguistic heritage. She travels round what was historically England's largest county discovering a huge range of dialect and dialect poetry. She meets with members of the Yorkshire Dialect Society, hears how dialect has evolved in different parts of Yorkshire, finds out what's been lost down the years and discovers a fresh passion for using Yorkshire dialect among several young poets in the region.

In an article about the programme for the Guardian, Edwards said: “My interviewees are all very proud of their Yorkshire roots and quite rightly so. Each of them felt that it was essential that children carry on the linguistic legacy and be taught to recognise and celebrate their heritage. Which is not to say that dialect is merely an emblem of history and fixed identity. It’s also something that’s diverse and dynamic.

“I did speak to a few older blokes in flat caps who wouldn’t look out of place on the set of Last of the Summer Wine, but I also met Sharena Lee Satti, a poet of Indian and Pakistani heritage who reads her work in Bradford dialect. And there’s Toria Garbutt, [pictured above], a punk poet from Knottingley, who uses dialect in her work not only to celebrate her regional identity but also to rail against classism and sexism. In her poem ‘Dares Not to Dream’, Garbutt tells us that ‘shit sticks in corners of forgotten towns’ where ‘old women, weathered as wellies, sit by thi sens, sup pints at eleven. No coffee mornings for these old lasses, no OAP yoga classes – they’ve come ‘ere to forget, they’ve come to put their minds at rest … And they’re strong as Yorkshire tea.’ Garbutt knows in her bones what I’ve learned by talking to people across Yorkshire: our dialect is alive, kicking and bloody gorgeous.” 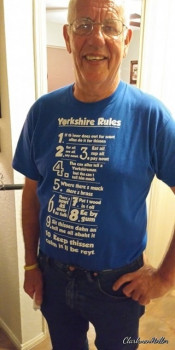 Another poet interviewed for the programme was Trevor Wainwright, who is known on his Write Out Loud profile as Trev the Road Poet, Trev, a presenter on Castleford’s 5 Towns Radio station, said of his interview: “I was asked about the importance of local dialect and said they should be preserved as an important part of our culture and heritage, and that we should look more at our language and stopped it being destroyed by people who shun dialects and accents but quite happily emulate TV presenters in pronouncing withdrawal as ‘withdrorral’ and drawing as ‘drorring’. Prominent people are perhaps more guilty in destroying the English language than others who prefer to talk in dialect. I mentioned how good it was to hear good regional accents in news reading and broadcasting, although there were a few users that seemed to go overboard.”

Trev regularly makes a poetry tour of Texas, and says on his Write Out Loud profile: “April and once more I was Texas bound for their National Poetry Month, not expecting what would happen, and that it would be acclaimed by others as my best tour yet by those attending who said I had variety and presence, and they understood me more. My reply: ‘It's only taken them nine years’ … My accent was a hit with many, including one student who asked his teacher how he could learn to talk like me.”

Trev was interviewed for the programme at 5 Towns Radio, and asked about his poems, “one of which I’d written over the weekend called ‘Yorkshire Rules’, based on a T-shirt design”:

Can I tell em thee ‘tha’ll bet I can

Rule 2 When tha feels life’s delivered a pig in a poke, always remember: there’s nowt as queer as folk

Rule 5 If thy hasn’t paid for t’coil remember to: Put wood in t’oil

Rule 6 An’ if tha need help wi summat, dunt go baht it, Sit thissen dahn an’ spake to someone abaht it

Rules 8 an’ 9 Mek sure every things fine wi: Hear all see all say nowt. An’ Eat all sup all pay nowt

Lastly Rule 10: If ever tha does owt for nowt allus do it for thissen

◄ Wigan Write Out Loud at the Old Courts tonight

I recall the lament from the late Devon writer and artist Brian Carter
about the disappearing Devon dialect which he put down to the
rate of incomers arriving from beyond the borders of England's
second largest county. Dialect must be preserved wherever and
whenever possible but in the wider sense, the prime object of a
creative spirit is to be understood. That provides something of a
conundrum. Would a Yorkie be understood in deepest Devon -
or vice versa?