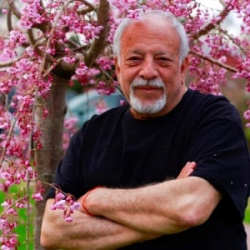 American performance poet George Wallace is returning for a four-venue tour of the north-west, with appearances in Bolton, Liverpool, Manchester and Cumbria. The visit, promoted by Bolton’s Live from Worktown arts organisation, coincides with the 200th anniversary of the birth of American poet Walt Whitman, who has unique connections to Bolton. Wallace has been writer in residence at the Walt Whitman Birthplace in New York since 2011 and was elected America’s first Beat Poet Laureate in 2015.

He will be performing at Bolton Socialist Club, Wood Street, on Tuesday 18 June; Quaker Meeting House, School Street, Liverpool on Wednesday 19 June; and at Gulliver’s Lounge, Oldham Street, Manchester on Thursday 20 June, all at 8pm. George Wallace will also be leading writing workshops in the afternoons at St George’s Gallery, St George’s Road, Bolton on Tuesday 19 June; Quaker Meeting House, Liverpool on Wednesday 20 June; and Gulliver’s, Manchester , all at 2pm. Advance tickets for either afternoon or evening events can be obtained for £5 from www.livefromworktown.org or on the door at £7. There will be a small number of open mic slots available in Bolton and Manchester.

◄ Listen up! Accent's on Yorkshire poets in dialect programme on t'radio

'Decide whose cry it is tonight, which girl to lift, to whisper or hum, which lullaby' ►