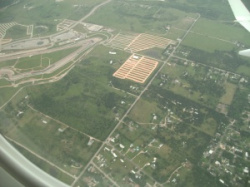 Image: Circuit of the Americas, home of the U.S. Grand Prix, besides which this 3.4-mile racetrack hosts concerts in its Austin 360 Amphitheater. I always wondered where it was. As it turns out it is South of the airport, this is the first time I have seen it.

To reception bound, coffee to bring me round

Should have left at 16:30 but they’ve moved it half an hour back

But the rest of my flights are on track

An hour and a half between first an’ second flight

Should be time to get things right

Ready for Heathrow but what if there they were to find

My suitcase an’ me had been left behind

Lookin’ at the roadworks thinkin’ will they ever get done

An’ the sky to the West is a darker grey

An’ today is departure day; I got some goodbyes to say

First AWR where I spent some time

Helpin’ sick an’ injured animals an’ puttin’ it in rhyme

In I go, a welcome an’ one last look round

I know they’re gonna be loved a while

I’m pleased, but soon it’s goodbye, an’ time to go

Get the day back on track

Tell him what’s happened of late

About how you’ve strutted your stuff”

On and off the stage, it’s like you’ve been all the rage

An’ KOOP Radio’s made it plain, they would love to have you back again

An’ KPET in Lamesa everyone speaks highly of you

Sayin’ it’s grand how your accent they understand more

As you read every poetry score

David’s not there, he ain’t got the heeby jeebies

Then Tom goes on to say “folks knew you had a ball,

Without doubt, showin’ ‘em what bein’ a travellin’ poet is all about

We continue to chat a while, laugh an’ smile

We hug an’ before I go he lets me know

Once more, I’m headin’ for the airport

But it don’t end here cos’ no doubt

On the way home I’ll find something to rhyme about

195) Car dropped off documents signed, an’ I’m away to check in

Despite only yesterday learnin’ of the change of flight

Find the departure gate, it’s 30 so I sit an’ wait

Priority 1 get some textin’ done

Send them my new flight number they may need it

196) Announcement for our flight Gate 30 it should have been

197) Airport walkways, some people appear to be in a daze

Along them they head, like the cast of “The Walking Dead”

A guy with a stupid grin on his face, decided to stop in a stupid place

We couldn’t help but collide, “Damn” he said but I didn’t abide

To challenge him to prove who’s the bolder

Sit down an’ wait till we’re called to board, then once I’m in

Find my seat, sit down an’ wait for the flight to begin

199) Take off on time, from Austin we depart

One last look with sadness in my heart

But also satisfaction over the poetry interaction

Takin’ stock of the new poets on the block

An’ me takin’ the time to capture it all in rhyme

For this year it’s now past, but it sure was a blast

An’ you can bet, as Thom said it was my best tour yet

Captain comes on to say “”Starting descent Miami 30 minutes away”.

It’ll sure be sweet to get off this seat

Nearly 3 hours in flight, from afternoon till night

A long time for an internal flight, so it seems to me

Cos’ I’m more used to a short hop, non stop

Cabin lights now on, shouldn’t be long, before we’re safe an’ sound

I’m thinkin’ have I done the right thing

Was going for the cheaper option a good idea

I’ll work it out for next year

See which options the stronger

More light too but will they stay on through the night

And will I be able to write

Safety video playing, were on the move, then a stop

Nothing unusual but after a while were stayed still

Then we were told someone had been taken ill

There would be a delay while things were sorted out

An’ while we’re stayin’, I’m gonna try an’ get some music playin’

But similar choice to last year, only a few I like

If everything goes alright I may still make my connecting flight

Now we’re off, approx 15 mins to take off

Then we’re on the runway engines given some blast

An’ we’re in the air homeward bound at last

Like last year it was lights out and blinds down with a poor inflight entertainment system, as a reslur no futher poems were writen until the lights cam on again, a what a boring flight

I ask and find we’re only 15 minutes behind

Now I can’t wait to hear the sound

Of the plane wheels touching the ground

Soon to be parking and disembarking

Away for the final flight but not too blue

So no need to fret or get in a sweat

Instructions followed to the letter, couldn’t have been better

Ring home to tell all is well

On board cabin luggage stored, hope my suitcase is as well

Cabin crew take their seats, take off, the last flight home has begun

206) Manchester airport below, downward we go

Once again the sound of the wheels hitting the ground

We’re taxiing to the terminal, a text I’ve got to take it

Tells me my suitcase didn’t make it

No need for sorrow, baggage counter says I’ll get it tomorrow

So get my taxi cos’ I’ve got to meet

My family waiting in Castleford in Lower Oxford Street

I wasn't to bothered about my suitcase, I was home