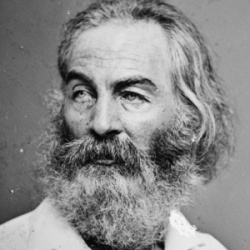 Bolton Write Out Loud will be celebrating the 200th anniversary of the birth of American poet Walt  Whitman on Sunday 19 May at Bolton Socialist Club. Why Walt Whitman? Because although the American poet never visited Britain, he developed close ties with Bolton. Two men living there, JW Wallace, an architectural draughtsman, and John Johnston, a Scottish doctor, corresponded with Whitman from 1885 until his death in 1892. The pair also visited Whitman in America, Johnston in 1890 and Wallace in 1891. Poets are invited to come on Sunday to read Whitman’s poems, or their own. Sign up to the open mic from 7.30pm, for an 8pm start. Your hosts are Jeffarama! and Gordon Zola. More details and Map

The music of time: Roger McGough still welcomes us all into poetry's big tent ►