The music of time: Roger McGough still welcomes us all into poetry's big tent 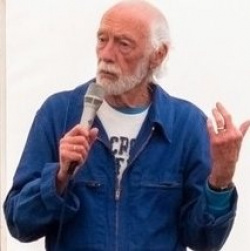 Time was when Roger McGough was regarded as one of the voices of a new poetry generation. As one of the Liverpool Poets, with Brian Patten and Adrian Henri, he encouraged thousands to have the confidence to believe that they could write poetry, too.

These days the calm, soothing voice of the presenter of BBC Radio’s Poetry Please has something of the bedside manner of a trusted, if somewhat older, family doctor. But although McGough may have just eased into his 80s, he certainly doesn’t look it. Dressed in a bright blue boilersuit, he delivered an entertaining set based around his latest collection, joinedupwriting, at an Arts Richmond event to celebrate a poetry competition that he had judged – on the theme of Time.

A poem called ‘The Cure for Ageing” begins: “There is no cure for ageing.” Commissioned by Age UK, it had its generally mature audience roaring with laughter. It is, in fact, a fabulously upbeat poem, containing spry advice such as: “Think yourself younger than you really are: / On a crowded bus or tube, offer your seat to a young man / Help a traffic warden across a busy road / Grow cannabis in the commode”.

Another, ‘The Living Proof’, offered more wise words: “The earth need not move, no call for / fanfares and fireworks. The perfect day / can be as ordinary as a stroll by the river, / as simple as the absence of bad news.”

The lunchtime marquee event, part of a bustling May fair on Richmond Green, had a carnival air at times, with the strains of a carousel hurdy-gurdy almost drowning out the more regular overhead refrain of Heathrow jets coming in to land. All this going on as we listened to a poem called ‘The Full English’, a pointed comment on immigration and heritage, even if it didn’t mention Brexit by name.

There was a lament, ‘I hear America Sighing’, after Walt Whitman, for what America has become: “Flags furled, insults hurled, banners waved in anger. / In Times Square the wind moans, and all around the sound / of groaning, the earth trembling as the screen fades to black. / Stop sighing, American, start singing. Time to come back.”

The last poem in the latest collection, which Roger McGough also read on Richmond Green, has the air of a belated confession. ‘So Many Poems, An Apology’ looks back on “being twenty, runningallthewordstogether / and thinking, There must be more to it than this.” Another ‘apology’ is for “trying to prove that, if not for everyone, / it is for anyone.” No need for apologise for that, Roger. It’s why you are still loved by so many.

The competition that he judged was won by Jenny Martin. Her poem, ‘Disaster in Silence’, oddly enough talks about a carousel’s horses after some nameless catastrophe “petrified mid-gallop … open-mouth shock on their faces, such that it seems they were once alive”.  Jenny was unable to make the occasion and it fell to me to read the poem – twice – as the carousel played outside on the green. You can find the competition winners and the commended poets on the Arts Richmond website here. An anthology of 40 competition poems will be launched on 29 June.

One other thing. Is there a statute of limitations on poetry plagiarism? If so, what is the time period? At the risk of being ungallant, I should say that we are talking more than 40 years ago. During a Q&A session after Roger McGough’s reading my wife finally unburdened herself of a sense of guilt that she had first mentioned to me two years ago, when we had seen him perform with Little Machine – that at the age of 17 she had largely plagiarised a McGough poem that was published to great acclaim in her school magazine. She chose to make this confession in public, in a tent full of people. Mr McGough absolved her, of course. What a gent.