Of Course, the Yellow Cab: Ken Champion, The High Window 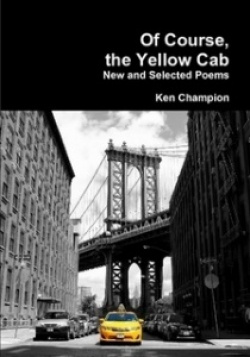 Ken Champion is a poet, novelist and critic whose work has been published widely both at home and abroad. His publications include three full collections of poetry, a volume of short stories, two novellas and three novels.

This generous volume of 84 new and selected poems is divided into eight distinct sections and spans three continents. The unusual title, as if overheard in conversation, is a sudden realisation on the part of one of the speakers that the cover art is of a scene in New York City because the presence of the iconic yellow cab somehow says it all. The fact that the cab is the only coloured object in the black and white photograph makes it all the more emphatic.

Not surprisingly, given Champion’s career as a lecturer in sociology, his poems are populated with people from all walks of life whose actions are keenly observed: cab drivers, street musicians, café waitresses, film crews, truck drivers and cinema usherettes “who see the world at 24 frames a second”.

Champion is a poet of place. We move effortlessly from Rome to Madrid, Chicago to Barcelona, London to Memphis.  Each poem is a fleeting description of a specific scene, “finger-framed” to focus on a defined area. There is little that escapes his attention. Beyond the people there is often a mass of architectural detail: acanthus capitals, sunray doors, latticed panes, Georgian windows, Regency houses, Victorian chimneys and the curved diamonds of the gherkin. Nowhere is this more apparent than in the poems ‘An Interest in Architecture’ and ‘Period Piece’:

They’re looking at a house, arguing whether

it’s Victorian or Edwardian – one points out the

chimneys, the other, the latter’s multi-paned sashes,

These poems not only bristle with detail, they are also fast-moving. While some poems might read like lists, the crowding effect that they achieve leaves the reader feeling breathless. What is of particular interest is the way in which the scenes are interpreted and the characters perceived.  In some instances, possible deeper narratives take the form of hypothetical inquiry.

In several of Champion’s poems considerable play is made of the contrast between movement and stasis. Many poems refer to prints, photographs, white marble, static camera shots and museums. They have a certain stillness about them and yet at the same time this stillness is also invested with movement as Champion observes the people who are caught up in the scene that he is writing about: a woman walking into a bar, his father hurling a book at the living room wall, a girl giggling into a Kodak.  The play between stillness and movement is employed with skill and invention  in ‘Pedestal’ where the statuesque figures in a Barcelona street are in fact not statues at all but real people who have perfected the art of standing still:

or a smirking salute from a copper cast G.I.

In several poems Champion writes with real depth and compassion about his father. To achieve a measure of balance, a zany sense of humour is displayed in poems such as ‘Interview’ and ‘Greenfingers’. In closing, I note that in ‘Random Spanish Lesson’, Champion may even have invented a new collective noun: “a malice of poets”. Sounds ominous.

Ken Champion; Of Course, the Yellow Cab; The High Window, £10

◄ 'The dogs, I note, are smaller, the owners less ferocious'