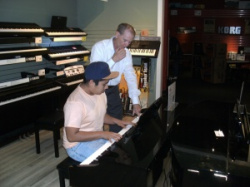 Image: My friend Clark Von Heller encouraging an up and coming young pianist called Kevin (see poem 158). Clark is showing him the chords for his variation of Pachalbels Canon

At his evenin’ class no one came,

Then his amplifier gave up the game

As his fingers flew with ease over the keys

Playin’ a classical score it really made the day

Both begun, Clark calling the chords they played as one

A pause I render applause, it was a blast, and a memory that will last

Whether I rest, walk, fly or drive,

Of the evenin’ Clark an’ Kevin made music come alive

Bear in mind for another day, when I go away

Another example of how to save a heap

For a travellin’ chap this Limey guy know what to do

160) Shopping done, me an’ Clark had a laugh interactin’ with the staff

An’ so carries on the day,

I can do more when I see fit, an’ I’m takin’ a break from my poetry an’ wit

Clark’s ESL class where I hope I don’t come  a cropper,

Speak clear an’ slow afore I let my accent flow

Cos’ it would be a mistake, if I hit them first with Yorkshire Spake*

* Spake is speak in the Yorkshire dialect

161) Clark said “Can you make your poems short and sweet”

Really ace saying so much in such a short space

So I did an’ the students recited them too

An’ I thought in a while they could be, speakin’ better English than me

Laughing, chatting, it was a blast, shame it didn’t last

No sign of the sun, not to dejected, rain is expected

Clark’s busy so I’m left to my own devices

I’d heard of the migrant centre before, so I found it and walked in the door

No time for lurkin’ soon I was workin’

Got ‘em smiling, so beguiling

Not bemused, many amused

An sometimes of my tongue would roll “No comprende Espanol”

That too was grand, and they seemed to understand.

I ring Daniel an’ soon, I’m headin’ to his school for the afternoon

In his classroom we meet an’ greet

To his students an introduction, then a performance is in production

Talkin’ about travellin’ many a mile, an speakin’ Yorkshire style

An’ regale many a travellin’ tale

How I use the time to compose in rhyme

Poems written on the road, in journalistic ode

To The Valley for the poetry fest an’ the rest

Three classes an’ they’re goin’ well, students enjoyin’ it I can tell

After the 3rd class it’s time to go, beat the heavy traffic flow

About learnin’ Yorkshire words an’ gettin’ the hang

Of sayin’ ‘em with a Yorkshire twang

164) Back from La Joya, then time for dinner

We know the score havin’ eaten there before

Me Mario an’ Clark, Amy joins us an’ I’m thinkin’ as the day ends

What better way to spend it than time with friends

Thinking “Well I never, Ivy wants to sleep in the same room as Trevor”

He’d find Trevor didn’t mind, in fact he was rather glad

Ivy had changed her mind

So moving gently in the dark, put her back in the same room as Clark

To whom he would say later today, I hope my snorin’ didn’t drive her away

As Nianna’s guest, gonna give my best

Tell ‘em about life back home, an’ what I get up to on my roam

I go in an’ sit down an’ a nice surprise I see a young girl with shining eyes,

When we told her not to fear, to go ahead and write

So to my delight she showed me a poetry score

168) And so the talks begin, when the students come in

No one talk is the same, no prepared script

An’ I find the students don’t mind, as I give information about where I live

How we speak, say hello an’ good bye, they smile

An’ usin’ Bertha as an example of what they could do

If they wanted to write poetry too

169) Day done at Valley View, may have only reached a few

But when all said an’ done, change begins with just reachin’ one

Adding keep on writin’ an’ hopefully one festival we’ll see

Her on the same stage as me

Fun in fact, me an’ Daniel like a double act

And in the main Really great to see old friends again

But sad to say, there’s no poetry in schools today

An integral part of the festival, sharin’ my poetic art

Renditions I give, tell the students about where I live

My rhymes that tell of my travellin’ times

Advice given about writin’ travelin’, livin’ the dream

While you’re young but never too old to be bold

To dream of what you want to do

Now computer on my lap, I’m sat on the settee

172) Afternoon spent workin’ an’ relaxin’ but nothin’ over taxin’

Lunch with Clark, fries an’ a Big Mac, then we’re back,

I transfer another poetry score, before taking Ivy out once more

An’ she seems to enjoy walks with the Poetry Boy

Thinkin’ it’s neat, when she’s back an’ I give her a treat

An’ its nice an’ cool with the air conditioning

As I transfer more of my potential renditionin

The we sat spoke, laughed as we made a joke

An’ suggest he gets up an’ has a go

To take part I tell him speak from the heart

I was in it but as usual didn’t win it

An’ as I wave her goodnight, an she drives off into the night

Not gonna rush, gonna take Ivy out an’ enjoy the mornin’ hush

We’re out walkin’ an’ it’s great, time is somewhere after eight

The suns beginnin’ to get stonger, I wish this moment could last longer

Drivin’ downtown an’ see what workshops are goin, down.

An’ tells me, I’ve arrived but I’m miles from where I need to be

Led me a merry dance so I’ll take a chance

And go the way I think I know

Nianna rings askin’ where I am, I say “I’m lost maam”

But went on to say, I was headin’ the right way

South an’ not bereft, I know cos’ the sun’s on my left

So she tells me how to get there, it’s a case of a wing an’ a prayer

An’ just in Nianna I put my trust

An soon the car park I’m pullin’ in

Cos’ that was what the first workshop was all about

A food revolution, the taco evolution

So let’s have a bite, then get down an’ write

An’ willin’ to try a different fillin’

Savoury or sweet, I’m sure they taste neat

Fill ‘em with food from around the world an’ share

But would they think I’d gone wacko

Figure Westward looking, hand behind as if gently pushing

180) Last workshop before lunch, we take part, in feelings of the heart

Love, happiness, pain, hurt, wishes, dreams, what we desire to be

What we once were, the answer is mostly always “ME”

Three workshops done, somehow I don’t fancy another one

So as is my will I’m away to chill an find, my note book I left behind

I pick up her lead it wags some more, I put it on we’re out the door

Havin’ fun in the afternoon sun, she needs to go, an’ does so

Now were back on the sofa, relaxin’ Ivy at the side of me

Lettin’ time pass us by, an’ I’m one contented guy

182) Bath time for Ivy, she goes in, covered in water, she looks so thin

Clark thinks it’s grand when I lend a hand

After takin’ pictures for my blog of one wet lookin’ dog

Soon she’s done, dried an’ out the garage door,

An’ if in your stomach, there’s still a hollow

When it’s eaten the tables are put away

It’s time to get the readings underway

One by one to the podium we come

Registered or featured poets to recite at Pachanga night

Different styles across the miles through tears an’ smiles

All lauded an’ applauded, an’ then were done it’s time to go

Farewells said, away we head. All with a wish so clear

To meet up again in The Valley next year

I read, him an’ Mario smile, one score an’ then some more

They were delighted when I recited away

With Ivy there, the perfect way to end the day

Facebooked my friends let ‘em know how things went down

In this great, friendly border town

An’ Meliton last night made it clear,

And you don’t have to guess, the answer was a definite “YES”

An be poetry free for the rest of the day

To supper with Marios’ family in Reynosa tonight