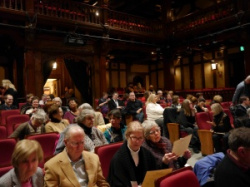 Simon Armitage is famously from Marsden, as is Write Out Loud. I walked past his dad the other day, during my morning constitutional; and here I was attending his and Peter Oswald’s reading at the Folger Shakespeare theatre in a subzero Washington DC, just one block away from what has been described as the most powerful place on earth: Capitol Hill. Here to visit family and take in the local poetry scene, I was kindly offered press tickets by organiser Teri Cross Davis. I am glad I accepted.

In this intimate theatre space, poet-dramatist Simon Armitage and dramatist-poet Peter Oswald delighted the near-capacity audience with an all-too-brief taste of their verse, delivered in contrasting styles, followed by discussion of where drama and poetry meet,  led by head of the British Council in the US, Paul Smith.

Armitage’s suggestion that drama is turning words into people, was exemplified by Oswald with a mesmerising performance of one of his folk tales, with which he commenced the evening’s readings. Post-show mingling revealed that I was not alone in figuring that Oswald, quite apart from being a consummate writer is a capable thespian too, with his powerful stage presence, physicality, and command of  multiple voices and accents.  The story was his own, written as a classic folk tale but with modern humorous references. I wondered if some were perhaps too UK-specific for a metropolitan US audience, but the reaction suggested not. A superb set it was too, and a hard act to follow.

Not for our Simon, who took to the lectern for his reading, riffling through his books and notes as if deciding on the spot what to read, a Columbo-esque, understated delivery. So many poets over-explain, rather than, as Armitage does so well, give just sufficient to intrigue for what is to follow, then let the poem speak for itself. Rather like Heaney’s, his poetry speaks plainly, pen as weapon.

It was intriguing to hear a US audience’s reactions to his choice of extracts from what seem very British works, including his radio play Black Roses, based on the killing of Sophie Lancaster, references to Network Rail’s leaves on the line excuses, and asides about Huddersfield, the town of which his native Marsden is a part. His much-lauded translations/adaptations of Gawain and Euripides are, I am informed, better known stateside.

I’ve often wondered how far his stage persona is as natural as it appears, how much a self-conscious un-self-consciousness. Whatever, it comes across as a kind of sharing of confidences, a cosy chat that engages his listeners, British, American, whoever. Witness his anecdote about being approached by Pixar for a possible animation of Gawain and the Green Knight: “I think they thought I was the original author.”

The post-reading chat was chaired by the British Council’s Paul Smith. Asked about differences between page and stage, Oswald talked of, in drama, the pain of having to work collaboratively, and having some of your writing “axed”. For Armitage, such collaboration was exciting, recognising the need for others in the team to suggest changes: “You can’t expect a drama audience to unpick a difficult metaphor in the way that you can expect them to do on the page.” The challenge in drama, he suggested, is to be engaging, entertaining and thought-provoking, without surrendering your integrity as a writer: “We have to remember that some people find poetry boring.”

Smith asked, given the location, how the pair felt their work follows in Shakespeare’s footsteps. Having earlier generously endorsed Homer, Armitage felt it only proper to give Shakespeare the thumbs-up too, though was quick to deny any suggestion that he might consider himself in the same category as the bard. Perhaps not, but with his gathering national treasure status, one wonders how long it might be before he gets his hands on the laureate’s sack of sherry.  If this audience had a vote, it would be soon.

The event was held in the Folger theatre, dedicated to performances of Shakespeare plays, being part of the huge Folger Shakespeare library, globally the third largest such archive. It was timed to coincide with their current production of Oswald’s play, Mary Stuart, adapted from a work of Schiller’s, in turn part of the OB Hardison series of poetry events organized by Folger’s Teri Cross Davis. The series includes an annual poetry prize, poetry in schools, the Emily Dickinson birthday tribute event, and has included readings by many famous poets: Octavio Paz, Lawrence Ferlinghetti, Allen Ginsberg and more. I have added a couple to our gig guide, including one I am disappointed to be missing, on translation in poetry with Adam Zagajewski, and one featuring seven poets responding to the theme of power in the works of Shakespeare and Schiller.

Hi Frances, thank you for your comments. It was very good, and the review went down well locally so I have had press tickets to other events on the strength; reviews to follow. The laureate thing is gossip I heard and a comment in a Guardina article from some time ago, but I actually would not be surprised if he were to accept, if offered.
Andrew, I cannot believe you don't know the 'leaves on the line' reference. Being a bit disingenuous perhaps?
I was delighted to look at your website. More power to your elbow. Was the Oldham printer the one based at the back of premises on Union Street? If so, it is a fascinating place but he was too busy to take on a project of mine too.

Nice review. Sounds like a good night but, as an employee of Network Rail, I'm wondering what the leaves on the line comment was about.

My first two Fine Press publications were of Simon's 'In Memory of Water' and 'Considering the Poppy' - if you're interested you can see details here http://www.finepresspoetry.com

Thanks for this overview of what sounds like quite a momentous evening, Julian. Do you really see him as maybe the next Laureate? Interesting. Would he accept if offered? Carol Ann did and everyone asked the same question back then I seem to recall ...