Competition closes in 19 days, 0 hours. Get details and Enter. 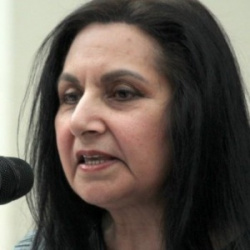 The poet tipped to succeed Carol Ann Duffy as the new poet laureate has turned down the job. Imtiaz Dharker, who won the Queen’s Gold Medal for poetry in 2015, and who has described herself as a “Scottish Muslim Calvinist”, said she needed to focus on writing, according to a report in the Guardian.

She said: “I had to weigh the privacy I need to write poems against the demands of a public role. The poems won. It was a huge honour to be considered for the role of poet laureate and I have been overwhelmed by the messages of support and encouragement from all over the world.”

Alice Oswald has meanwhile thrown her hat into the ring as the next Oxford professor of poetry, as Simon Armitage’s tenure comes to an end. She may be up against Australian poet John Leonard and Canadian-British poet Todd Swift, and would be Oxford’s first female professor of poetry.

Poking fun at the delay in naming a new poet laureate – a role once turned down by Philip Larkin – and likening it to the hold-up over Brexit, the poet Luke Wright said on Twitter: “We currently don’t have one. We’re a vassal state. I think by default it falls to Pam Ayres – take it away, Pam!” Ayres responded: “Gee, thanks Luke. It’s been quite a wait.”

◄ 'The real story always begins at the third door'