Competition closes in 22 days, 1 hour. Get details and Enter. 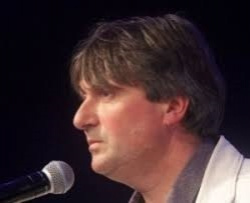 Simon Armitage, one of the contenders to succeed Carol Ann Duffy as poet laureate later this year, has been awarded this year's Queen’s gold medal for poetry, it has been announced.

Armitage, who grew up in the Pennine village of Marsden and still lives in West Yorkshire, began writing poetry while working as a probation officer in Greater Manchester. He is currently professor of poetry at Oxford and Leeds University, and previously filled the same role in Sheffield. The award was created by George V in 1933 at the suggestion of the then poet laureate, John Masefield, and is decided by a committee headed by the laureate. Summing up the committee’s decision, Carol Ann Duffy praised Armitage as “boundary-breaking”, spinning “poems of emotional weight and musical grace from the fabric of our everyday lives”.

His poems, wrote Duffy, “would challenge hypocrisy wherever they encountered it, giving voice to those rarely admitted into poetry, and extending an arm around the unheard and the dispossessed. And for all the attention to the grain and trouble of daily lives, the poems never lost sight of wider horizons: our outer space full of possibilities, the dream space of our love.”

Armitage told the Guardian he was “absolutely delighted” by the award. “When you write poems you’re not always sure they are hitting the mark. So this is incredibly flattering,” he said.

The 55-year-old poet said his parents, particularly his father, had been emotional at the news of his medal, which he will receive at a ceremony with the Queen in 2019. Armitage is regarded as one of the leading contenders to succeed Duffy as laureate in 2019.

Previous recipients of the queen’s medal include Philip Larkin, Siegfried Sassoon, and WH Auden. Armitage told the Guardian: “I think if that strangeness ever goes away, you’re finished as a writer. If you stop being bewildered by whatever recognition comes your way. Seeing your name on that list, it is humbling.”

His translation of the Middle English classic poem Sir Gawain and the Green Knight was published in 2007 and has sold over 100,000 copies worldwide. The Death of King Arthur was shortlisted for the 2012 TS Eliot prize. Armitage's translation of the medieval poem Pearl was published in 2016 and won the 2017 PEN America Award for Poetry in Translation. His 2012 non-fiction book Walking Home, an account of his poetry-reading journey along the Pennine Way, was shortlisted for the 2012 Portico prize. The follow-up publication, Walking Away, told of walking the South-West coastal path.

He has also written short poems inspired by the language and landscape of the Pennine watershed that were carved onto stones across the upland by stone artist Pip Hall, forming a permanent Pennine poetry trail.

Writing in the Guardian last month, in an article that could be seen as a manifesto, Armitage said the laureateship "should be awarded to a poet of true recognition, a poet admired by both their fellow poets and by the public, a poet who is both expert and enthusiast, and a poet who is an accomplished practitioner of the art as well as its champion and ambassador. No one else will do.

"It should be a poet who listens more than they talk, who reads more than they write, who thinks more of other poets’ work than they do of their own, and who knows and cares deeply about the poets of the past, because there are more of them than us and they are better. If you put the laurel crown on your head and you haven’t read the whole of Beowulf or the Iliad, or don’t know who wrote Lycidas, or can’t recite a poem by Sappho or Emily Dickinson, or can’t name a poem by Derek Walcott, then you are not worthy of the role. Prepare to be embarrassed at your first interview. The great majority of the best poetry ever written is freely available so not to have to read it – even just to disagree with it – is inexcusable.

"The laureateship requires experience and dignity. We’re not looking to appoint the mayor of Toytown or a mascot for our everyday aspirations. Or someone who has published four books, sits on five committees, has judged six prizes and is a nice person, or someone who is a shop-steward for contemporary values first and a poet second (or third)."

◄ ‘Freeman Street, Grimsby’ by David Cooke is our Poem of the Week

'I pawed away from the trunk, fumbled, and took my first step toward not returning' ►

Hope he is made Poet Laureate. As a teacher, I saw how his poems spoke to all ages and abilities.