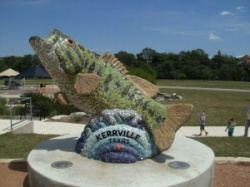 Image: Statue of the Guadalupe Bass, in a park at the side of the Guadalupe River, it is the state fish of Texas, and found only in the Hill County streams of  Texas, some of the tiles have been crafted by Kerrville citizens as a testament to the natural resources of Texas.

East horizon hue, tells me sun up ain’t yet due

Gonna drive with care, cos’ there’s animals out there

An I know how I’m gonna feel, if one ends up under my front wheel

Then smile at what I thought was a dead animal

Was a piece of curled up rubber tyre

Seen another one where it’s only a few cents more

Still better than what the others ask, so once more my tank is full

147) I’m drivin’ into Sterling City, my stomach cries out with pity

“Hey I ain’t had anything to eat since yesterday”

Seems only right to stop for a bite

A quick breakfast snack, then back on track

Then I see, a dog at the roadside, on its own, not the safest place to be

Or someone take him, mistreat him an’ beat him

So I turn go back, get out, it runs to my feet

In my arms he’s sittin’ givin’ my chin a lickin’

I look left an’ what I see inspires me

I stop, let him out, a bunch of ‘em come out and make a fuss

Thanked by the owner I came away thinkin, he was kinds cute an’ sweet

I see dead animals lying there,

At the roadside reminds me to drive with care

Stop in the distance I can see to be clear, an’ what I’ve seen

Reminds me of what could have been

My new four legged friend could have met a messy end

Hopefully helpin’ him ain’t been in vain,

Though I doubt I’ll ever see him again

Unless it’s in heaven at the end of life’s roam,

An’ he remembers the poet that when he was lost, took him home

Take out what I need for tomorrow an’ no more

An’ pictures of this part of my roam, to go on facebook when I get home

A walk by the Guadalupe River someone suggested I try it

Ideal for peace an’ quiet

Partin’ with “have a good day" then I’m snappin’ away

Kids in the fountain playin’ ducks by the river layin’

An what a story they’ll tell, when I get home

At the end of my 9th Texas poetry roam

151) Well so ends the afternoon, evenin’ seems to come too soon

Time to head back to the motel

I’m thinkin’ it could be fine, cos’ I got some good songs on mine

Plugged it in they came on an’ sounded good,

I’m thinkin, why couldn’t I find it before

152) Drivin’ back to the motel, fuel tank half full

Once again is seen a sign for the cheapest gasoline

Same price as this mornin’ an I’m knowin

So I do an’ as I drive away

A photo opportunity, I sneak out quietly

They look up an’ see me, I stand as still as can be

After a while I look down to switch my camera on

An’ when I look up, they’re gone